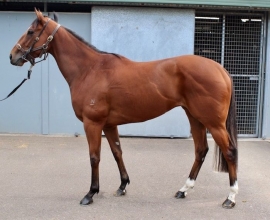 Set Goals was one of several outstanding results for the June sale, which also included:

*Lot 217 – Mandayana in the Broodmare category – offered by Ciaron Maher Racing and purchased by Halo Racing for $100,000

*Lot 73 – Hussy’s Glow in the Race Fillies category – offered by Prime Thoroughbreds and purchased by Mitchell Bloodstock for $70,000

*Lot 197 – Gypsy Snitz in the Broodmare category – offered by Newhaven Park and purchased by Ben Kwok for $70,000

*Lot 240 – Ringstrasse in the Broodmare category – offered in foal to Hellbent by Glastonbury Farms and purchased by Darby Bloodstock for $65,000

Set Goals (pictured) became the seventh horse this year to sell for $100,000 or more through an Inglis Digital Online Auction, and 21st in total since the platform was launch in May 2017.

Set Goals will be transferred to Cameron Crockett’s Scone stables and race on until September, when she will likely be served by Newgate Farm stallion Capitalist.

“If we could get a win or two out of her before she becomes a mum, great, but if not, she’s still a very good buy as I think she will make a very good broodmare,’’ Morrissey said.

“I worked at Arrowfield a long time so I know the family very well and I actually saw her I Am Invincible weanling half sister at Newgate a few weeks back and she is an absolute belter, so I’m really excited to get my hands on Set Goals.

“The Inglis online auction is a great concept, it’s easy, seamless, I have full confidence using it again as a great platform to buy or sell horses.’’

Arrowfield’s Jon Freyer said: “We’re really delighted to achieve an outstanding result for our client, and setting a record shows that online selling has well and truly come of age.

“Congratulations to the team at Inglis who promoted the sale very actively and generated terrific interest in Set Goals.

“The online sale is a valuable option to have for particular horses, it works for buyers and vendors and it’s certainly a format we’re very comfortable using.’’

“The Inglis Online platform has again asserted itself as the best online platform for breeders, vendors and owners to sell their product,’’ Melmeth said.

Entries close at midnight Wednesday July 24, with the catalogue available for inspection from midday Friday July 26.