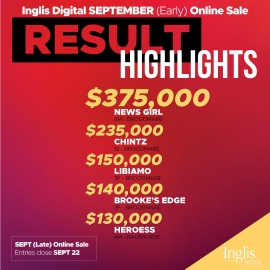 Offered by Geoff and Paul Duryea and partners, the 6YO mare sold to Two Bays Farm following a thrilling bidding duel.

News Girl was one of seven lots to realise $100,000 or more in the auction, leading to another highly successful sale which grossed $5,310,950 at a clearance rate of 81% to further assert itself as the clear market leader in digital online sales.

Geoff Duryea was thrilled with the result of News Girl’s sale, despite having mixed emotions at having to part with one of his stable favourites.

“She’s a bloody ripper but the time comes, especially with a syndicate horse, that you need to sell and we couldn’t be happier with the result,’’ Duryea said.

“We had a lot of offers privately for her and knocked back $300,000 just the other day because we believed she was a better mare than that.

“Thank you so much to the Inglis team, to [Inglis Senior Bloodstock Consultant] Brett Gilding especially, the efforts in promoting her in the lead-up was recognised by so many, I had a lot of phone calls about her, she was very popular and the way Inglis presented her and the whole auction is to be commended.

“The syndicate is really happy she is going to a great home and we look forward to following her progeny for years to come.’’

A decision on which stallion News Girl will soon visit is yet to be finalised, but Two Bays’ Ross Ferris hinted Deep Field was an early favourite.

“She’s a mare whose progeny will be highly admired by trainers and the racing public alike, no matter who she ends up being served by,’’ Ferris said.

“She’s been an outstanding race mare, a 97 rater, was competitive in literally every race she contested, was a mare with a fast cruising speed, was front running, raced in very good company most of the time and always did herself and her owners proud. They’re all highly admirable traits.

“We bought the mare sight unseen physically, we went off the recommendation of [Inglis Victorian Bloodstock Manager] James Price largely, I mean we’d seen all of her races and the photos online and the promotional videos Inglis did ahead of the sale but we’ve had to rely on good judges and the Inglis team – in particular James – and their comments on the mare.’’

The second-top lot of the September (Early) auction was Chintz (Savabeel), a G2-winning, G1-placed mare and also the dam of a G2 winner, who sold to Cunningham Thoroughbreds and Clarke Bloodstock for $235,000.

A decision on what stallion she will visit this breeding season is expected to be made in the next 48 hours.

“The obvious one for us is to go to a son of Not A Single Doubt which would make that foal a three quarter to Not An Option, who is already a G2 winner, so down a Farnan or Anders route but we haven’t got that far yet to be honest. Even proven stallions like So You Think or Pierro are good options but we’ll make the call in the next day or two,’’ Mitch Cunningham said.

“She’s an outcross to Danehill and there’s plenty of upside with the family so we have plenty of options there.

“She was G1 placed herself, she’s a sprinter/miler which is a great commercial proposition in the Australian market so we’re thrilled to have got her today.

“The market has been so strong the past year especially, we target those sprinter/miler mares and you’ve got to strike when you can.

“We’ve been active on the Inglis Digital platform for probably the past two years, we’ve bought some nice horses and missed out on even more but its functionality is great, all the information for buyers is there and more people are becoming more familiar and confident buying and selling online, be it a racehorse or a house so we’ll be back for sure.’’

Peter O’Brien of Segenhoe Stud, who offered Chintz in the auction, added: “There were a lot of astute breeders interested in her, she’s a fantastic and proven young mare.

“I love Inglis Digital, we had a terrific year last year and we raised the bar this year with the quality of stock we were offering and it’s been another fabulous year and as a result, we’ll be raising the bar again next year because it’s a fantastic format, particularly for mares because it takes all the stress of the preparation away.’’

*The Grahame Begg-trained Written Tycoon 3YO Libiamo, who sold to Cranton Bloodstock for $150,000

*Brooke’s Edge – an unraced Hinchinbrook half sister to dual Group winner Every Rose - selling to Edinburgh Park Stud for $140,000

*Last-start winner Yulong Captain, who The Racing League secured for $121,000

The Inglis Digital action continues tomorrow and Friday with a bespoke online auction for high-class 2YO and multiple Group winner Every Rose (Choisir).

The Darby Racing-campaigned speedster - a $160,000 yearling purchase herself – was a lightly-raced two-time Group winner, on debut as a 2YO in the G3 Gimcrack Stakes and again as a 3YO in the G2 Light Fingers Stakes when defeating the likes of Hungry Heart, Away Game, Thermosphere, Vangelic, Elizabeel etc.

Scott Darby said: “In many respects, she was the perfect 2YO and it’s a testament to her class and attitude that she was capable of progressing again to win a top-class race as a 3YO.

“Obviously I’m biased, but I think she is a commercial breeders dream, she’s good looking with a very rare form of natural speed and precocity which is so desirable in the commercial marketplace.’’

To view a parade vision video of Every Rose, CLICK HERE.

Bidding on the ‘Every Rose Online Sale’ will open tomorrow morning (Thursday September 16) and close from 4pm Friday (September 17) at inglisdigital.com.

For more information on the sale of Every Rose, please contact a member of the Inglis bloodstock team.