No doubt about it, Samadoubt’s a Group 1 winner 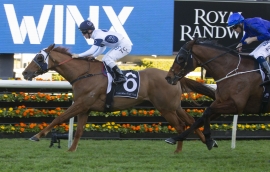 Darby Racing’s Samadoubt has claimed the first Group 1 of the 2019/20 racing season, making all the running to land a surprise win in the Winx Stakes over 1400m at Randwick.

The 6YO gelding (Not A Single Doubt x Isadora) started at $34 with TAB Fixed Odds, but defied that price to defeat a stellar field containing seven individual Group 1 winners much to the jubilation of his group of owners and trainer Bjorn Baker.

Offered at the 2015 Inglis Classic Summer Book by Riversdale Farm, Samadoubt was bought for just $40,000 by Darby Racing and becomes the 17th individual Group 1 winning graduate for Inglis so far in 2019.

He is the third Group 1 winner sourced from the Classic Sale by the syndication company, following dual Group 1 winner Yankee Rose, a $10,000 buy, and Group 1 Golden Slipper winner She Will Reign who was purchased for $20,000.

“He’s such a tough horse and he has come back this preparation a more improved horse so we thought he would at least run well but the best wins are the ones you aren’t really expecting,” Scott Darby said of Samadoubt.

“I actually watched the race from home and halfway up the straight I thought ‘wow we might run a place here’ but he just kept kicking, it was incredible.”

“When you’ve savoured Group 1 success like we have with Yankee Rose and She Will Reign, it actually makes you realise just how hard these wins are to come by, so you savour them even more.”

A clearly elated Bjorn Baker told Sky Racing, “From Winx to Samadoubt, hasn’t it got a good ring to it?”

“I’ve a had a great run with them (Darby Racing), they’ve been great supporters of mine for some time and you’re grateful for that because it’s a game you’ve got to take the good and the bad,” Baker said.

Darby Racing also secured the Rothesay half-sister to Samadoubt at this year’s Inglis Scone Select Yearling Sale, with the final shares in the $38,000 purchase snapped up just 24 hours before the Winx Stakes.

In other stakes highlights across Australia:

On a day when four individual Inglis graduates claimed stakes success, 4YO mare Mizzy (Zoustar) was a deserving winner of the Group 3 Toy Show Quality over 1100m, following a string of unlucky performances at black-type level last season, including when beaten just 0.4 lengths in the Group 1 Surround Stakes at Randwick.

Bred by Robert Crabtree’s Dorrington Farm, Mizzy was bought from the Segenhoe Stud draft at the 2017 Easter Yearling Sale for $200,000 by Anthony Cummings, who also trained her dam Missy Cummings (Magnus).

Earlier in the day, 2018 Classic graduate True Detective (Shamus Award) was awarded the Group 3 Up And Coming Stakes over 1300m following a protest that was upheld by the stewards.

The Chris Waller-trained 3YO colt was purchased by Byron Rogers’ Performance Genetics LLC for $100,000 from the Moobi Farm draft.

At Moonee Valley another 3YO colt, this time the Richard Laming-trained Condo’s Express (Rubick), continued the red-letter day for Inglis graduates, becoming the second individual stakes winner for his sire in the Listed McKenzie Stakes over 1200m.

The bargain buy cost Laming Racing just $3,000 at the 2018 Scone Select Yearling Sale, where he was offered by Middlebrook Valley Lodge.

Saturday’s results continue the great run of success being enjoyed by Inglis graduates through the start of the new season in Australia, with the likes of Dawn Passage, So Si Bon, Begood Toya Mother and Dalasan already having scored at stakes level in August.