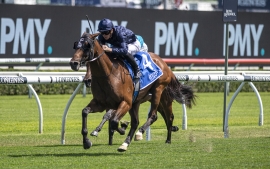 A trio of undefeated 2YOs dominate early betting for the $2m Inglis Millennium.

The TAB today released an all-in Futures market for the Millennium, which is headed by dominant Inglis Nursery winner Acrobat (pictured) at $2.80.

An Easter Yearling Sale graduate from Coolmore, the Ciaron Maher and David Eustace-trained Acrobat (Fastnet Rock) impressed at his sole race start to date, posting a 2.3 length win in December’s Nursery, a race that has produced the likes of She Will Reign, Extreme Choice, Mossfun and Wild Ruler in recent years.

Sneaky Five burst onto the scene at The Valley on Cox Plate Day, scoring a big debut win in the Inglis Banner before backing that up to claim the $1m Golden Gift at Rosehill in November.

Profiteer couldn’t have been more impressive at his only start to date, winning eased down by almost three lengths at Flemington in December.

“Ciaron Maher and Dave Eustace have been the dominant trainers of 2YOs in recent seasons and with the likes of Enthaar, Acrobat and Sneaky Five among plenty of others this season, they look to have a fair mortgage on many of the big upcoming juvenile races again,’’ TAB’s Glenn Munsie said.

“This Millennium field is shaping as an absolute cracker – five of the top seven in betting are unbeaten so far and the other two have finished second at their only start.

“The Inglis Millennium has already proved itself one of the best 2YO races in the country in only two years, with the inaugural winner Castelvecchio going onto multiple G1 success and now standing as a stallion at Arrowfield Stud and punters will no doubt get heavily involved again in 2021.’’

The Millennium will this year be run at Randwick on Saturday February 6, a day before the start of the Classic Yearling Sale, which will be held at Riverside from February 7-9.

Each of Inglis’ three primary yearling sales – Easter, Premier and Classic – are represented high in early TAB betting for the Millennium.

To view the full Millennium market from the TAB, CLICK HERE.

To view the latest Order of Entry for the Millennium, CLICK HERE.

To view the latest Order of Entry for the $1m Inglis Sprint – for 3YOs to be contested on the same day as the Millennium – CLICK HERE.