Outstanding Racing Prospects To Feature At Newmarket Next Week 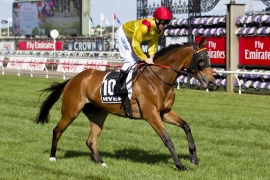 Talented stakes winners Vergara and Casino Dancer, plus a wealth of other in-training race fillies and mares will be offered among the Inglis Australian Broodmare and Weanling Sale in Sydney next week.

There are a multitude of racing prospects as part of both Think Big Stud’s and Gooree Park Stud’s unreserved reductions, plus the additional Select Race Fillies and Mares section of the catalogue.

“We feel she has gotten better with each preparation. She is currently in full work and would be ready to contest races over the Brisbane Winter Carnival, or she could also go for a spell and be brought back in time for the spring in Melbourne,” said Anthony Cummings.

Already a dual-Group 3 winner and earner in excess of $500,000, Casino Dancer lines up in tomorrow’s $200,000 Group 3 Hawkesbury Gold Cup for trainer Mike Van Gestel. After tomorrow the mare’s next trip will be through the ring at Newmarket where she will be offered as Lot 554 on Tuesday, 3 May.

“She has raced in some good quality company and has been very rewarding for us already, and she is in the perfect place in her preparation to go to Scone or Brisbane, and to continue right through the winter,” said Mike Van Gestel.

Think Big Stud and Gooree Park Stud will both offer some well-related and untapped racing prospects as part of their unreserved reductions at the Inglis Broodmare and Weanling Sale and the Autumn Thoroughbred Sale, to be held on Friday 6 May.

11 race fillies, many of which have been in pre-training for up to eight weeks, will join 27 breeding prospects from the Think Big Stud draft at the Inglis Broodmare Sale. They include daughters of the great winners to runners producer Pendragon, plus High Chaparral filly Hilylia, which is a half-sister to smart Group winner Shamalia that is back in work heading to Brisbane for the Junamo Stakes and Winter Stakes in June.

As part of Gooree Park Stud’s reduction next week, 11 in-work fillies and mares will join another 19 racing prospects, headlined by the well-performed Burning Passion, recent trial-winner Lasting impression, the promising Skylight Glow which ran fifth at Canterbury last Wednesday at her first start, and Twilight Charade which is currently in a winning preparation.

Over 1000 weanlings, broodmares, racing prospects and yearlings are set to go under the hammer at Newmarket next week.

CLICK HERE to register for Online Bidding. Online bidders are encouraged to physically inspect horses before bidding online. Online Bidding Applications should also be made by 5.00pm today ensure they can be processed prior to the sale.