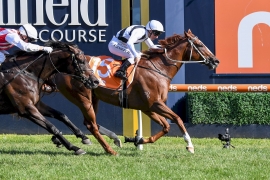 When Eureka Stud’s Scott McAlpine paid $26,000 for the broodmare Coupe Express in foal to Written Tycoon at the Inglis August Mixed Sale in 2015, little did he know the ride he was in for.

The unborn foal Coupe Express was carrying turned out to be Pippie, who today won her first G1 with an all-the-way victory in the Oakleigh Plate at Caulfield.

McAlpine foaled down and raised Pippie in the Darling Downs before offering her in his Eureka draft at the 2017 Classic Yearling Sale, where trainer John Meagher purchased her for $60,000.

Today she won her fifth career race at just start No.9 and took her prizemoney to $570,000.

“James O’Brien was selling [Coupe Express] and we liked her and thought she was good value, given she was carrying a Written Tycoon, but you never really expect the ones you buy in foal are going to be Group 1 winners,’’ McAlpine said.

“She’s a ripper Pippie. She was always a neat foal and she’s a nice neat race mare.

“She’s still very underrated but she can sprint. It’s bloody tough to do what she’s done, win a Group 1 at your ninth start, having already won four or five races.’’

Pippie becomes the 43rd individual G1 winner offered by Inglis since 2018, more than double our nearest competitor in the same period.

She is also the third consecutive Inglis graduate to win the Oakleigh Plate following the success of Booker (2019) and Russian Revolution (2018).

There are 24 progeny of Written Tycoon at the upcoming Premier Yearling Sale, which is at Oaklands in Melbourne from March 1-3.

Inspections for the Premier Sale begin at Oaklands this coming Tuesday, February 25.

Trained by Mark Newnham, the 4YO mare was having her first run since November but never looked in doubt, securing career win No.4 and taking her prizemoney to $510,000.

She was just a $90,000 Easter Yearling Sale buy for Darby Racing and De Burgh Equine from the Edinglassie draft.

Edinglassie will also offer Greysful Glamour’s Hinchinbrook half brother (ex Rippled) as lot 161 at this year’s Easter Sale at Riverside on April 7 and 8.

And Miss Siska (So You Think) made it back-to-back Stakes wins with a tough victory in the G2 Peter Young Stakes at Caulfield.

The Terry Davenport-bred Miss Siska is a graduate of the 2015 Easter Yearling Sale, where she was offered by Vinery Stud.

At Rosehill it was double delight for the Inglis Digital platform with winners Mustajeer and Greyworm selling partly or wholly online.

A 25% share in Mustajeer - successful in the Listed Parramatta Cup for trainer Kris Lees – sold through Inglis Digital to Richard Pegum in October last year for $320,000.

He will be targeted at the G1 Tancred Stakes at Rosehill in late March.

*Outstanding 3YO colt Brandenburg (Burgundy) – who has not missed a place in eight career starts – won the G2 Hobartville Stakes at Rosehill, defeating the likes of G1 winners Castelvecchio, Shadow Hero, Microphone, Warning and Prince Fawaz.

His Fastnet Rock half sister is lot 280 at Inglis Easter, being offered by Newhaven Park Stud.

*Fellow 3YO Adelaide Ace (Savabeel) destroyed his opposition in the G2 Autumn Classic at Caulfield, his fourth win at start No.7.

Edinglassie will offer his Sebring half brother (ex Ampin) at Easter as lot 320.

*And untapped New Zealand 2YO Need I Say More (No Nay Never) kept his unbeaten record alive with a strong win in the G3 Waikato Slipper at Matamata.

His Dissident half sister is being offered by Stockwell Thoroughbreds at the Premier Yearling Sale, which begins at Oaklands next Sunday, March 1.