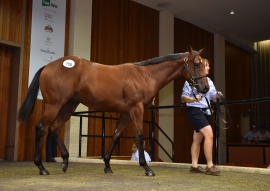 Session II of the Inglis Premier Yearling Sale came of age today at Oaklands, where 147 lots sold for a record average of $45,701, a massive increase of 43% on the 2015 sale. Further, an outstanding clearance rate of 88% continued the Melbourne sales’ record momentum.

Ciaron Maher outbid Paul Moroney at $220,000 to secure the Teofilo x Alynya colt (Lot 708) from Yarran Thoroughbreds, noting the similarities to one of his previous purchases from Premier, Group 1 VRC Oaks winner Jameka.

“He was a similar type of horse to Jameka. Teofilo is doing a great job and it was a nice page. He’s just a lovely athletic horse that really uses himself, which is what I look for,” said Maher.

“I’m not surprised he topped the session because he’s such a lovely horse, and I’m thrilled to get him. There has been strong competitive buying on the nice horses and the results are a good sign for breeders and also for Victorian racing,” Maher added.

Off the back of a new record-priced filly in Session 1, a daughter of Written Tycoon out of She’s A Knockout (Lot 672) set a new benchmark for Session II when selling for $130,000.

Owner and breeder Justin Lovatt consigned the filly through the draft of Hollylodge Thoroughbreds, and was heartened by the pedigree update she received last month when her half-brother Burning Front, also owned by Lovatt, won the Group 3 MRC Carlyon Cup.

Eric Pipersberg’s Next Level Bloodstock, who secured the filly to be trained by Malua Racing/Team Corstens, was impressed by the update, and the physical attributes of the filly.

“Burning Front beat Corstens’ smart galloper Del Prado, so that really resonated with me. I just loved her, she’s a beautiful mover that filled my eye,” said Pipersberg.

“Written Tycoon is hot right now, so that I don’t think we’ll have any trouble syndicating her,” Pipersberg said.

Competition from local, national and international buyers was fierce during the fourth and final day of Inglis Premier.

“Vendors and buyers recognised the value of the products on offer, and we are delighted to have been able to match these expectations and facilitate four wonderful days of trade,” said Inglis Victorian Manager Simon Vivian.

“Thanks go to all the vendors who brought quality horses that were prepped to an exceptional standard.

To see so many horses selling for over $50,000 shows that the Premier II session has truly come of age. It now occupies a significant position within the Australasian sales calendar,” he added.

Complete vendor, buyer and sire statistics for Session I can be viewed at inglis.com.au

Inglis’ Make-An-Offer Service is available for lots which passed-in at the Inglis Premier Yearling Sale.