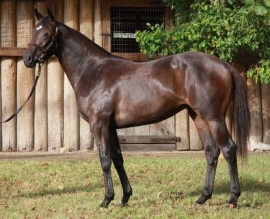 Stratum filly Proper Madam (pictured as yearling) put in an impressive last-to-first performance in the Inglis Bonus Handicap over 1200m at Caulfield on Saturday, netting a lucrative $100,000 Inglis Race Series Bonus for her connections.

After settling at the tail of the field the Jason Warren trained youngster unleashed a strong run from the 600m mark under Craig Newitt to record a three-quarter of a length victory over White House and Grand Daughter, which were also eligible for the Inglis Bonus having been purchased from an Inglis Select Yearling Sale and paid up into the $5million Inglis Race Series.

"I couldn't be any happier for the owners. We've picked up a nice bonus here today,” Warren said after the race.

"Michael Sadie and I picked out this race about a month ago, we planned to get here second-up and it's good that the plan has come off.

"We'll take her to Sydney now for the Inglis race up there,” Warren indicated.

Another $100,000 Inglis Bonus will be paid by Inglis to connections of the winner of the Benchmark 75 Handicap for three-year-olds over 1200m at Canterbury on 4 August 2012 should the victor be nominated to the Inglis Race Series. Like today’s event a win in the Sydney race could return at windfall of more than $140,000 to some lucky connections.

Entries into the $5million Inglis Race Series for yearlings sold or passed in at 2012 Inglis Select Yearling Sales close on 31 July 2012.