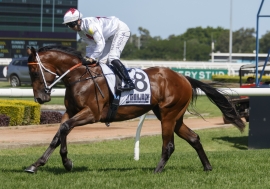 A particularly strong group of racehorses and racing prospects headline the catalogue for the Inglis Digital October (Early) Online Auction, which is now open for bidding.

Some of the catalogue’s highlight lots include:

Wutai Mountain – City-winning daughter of Commands with a filly from the first crop of Yes Yes Yes at foot.

The Inglis Digital platform continues to prove itself a windfall for buyers, with its graduates winning 518 races in Australia already this season, which is only 10 weeks old.

“Buyers know where to head when it comes to online sales in Australia because Inglis Digital continues to look after them with results, be it racetrack winners, successful broodmares or outstanding family upgrades,’’ Inglis Digital’s Nick Melmeth said.

“This catalogue again provides such a vast array of offerings and hopefully there will be more great stories like those generated in recent weeks by the likes of Inglis Digital graduates such as Callsign Mav, Ashman, Curran and Gundec.’’

The final countdown of bidding in the October (Early) Online Auction begins from midday on Wednesday.

To participate in the sale or to view the catalogue, CLICK HERE.