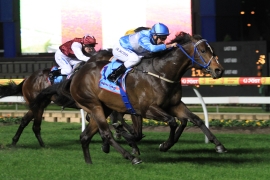 Two year's ago on Derby Day Highgrove Stud's Ron Gilbert, the breeder of Wanted eagerly tuned into the oncourse monitors at Flemington to watch the colt win his debut at Rosehill impressively.

This Saturday Gilbert will be again be at Flemington, to watch Wanted's half brother Shrapnel (pictured) in the Group One Coolmore Stakes.

A win for Shrapnel will be a victory for Gilbert on many fronts. Gilbert is not only the breeder but is also a part owner of Shrapnel. He has a share in the colt's sire Charge Forward and will offer a colt from Shrapnel and Wanted's dam Fragmentation at next year's Inglis Australian Easter Yearling Sale by Fastnet Rock.

Among the main rival's is another Queensland bred colt Star Witness. Another Group One victory for him will see the value soar for his Bernadini half brother that is also destined for Easter under Ken Turner's Almavale Bloodstock draft.

A win in the Mackinnon for Shocking will also boost the value of his Street Sense three quarter brother to be offered next Easter by Widden Stud as agent for Queenslander Laurence Eales.