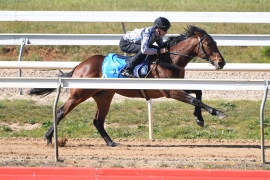 Videos of this week’s Seymour and Eagle Farm Ready2Race breeze ups – which has seen some of the fastest times of the past decade recorded - are now available online at inglis.com.au.

The action was headed by a pair of Shaun and Tal Nolen’s JCS Thoroughbreds 2YOs, which both breezed up on the synthetic track at Seymour.

A Vancouver x Anatole colt (lot 176) topped the session, stopping the clock at a speedy 10.16secs, while their Unencumbered x Magic of Melbourne colt (lot 43) was just shy of that at 10.20secs.

To view all the videos of the breezed-up horses to date, CLICK HERE.

Shaun Nolen described the Vancouver colt (pictured) as “a dream to deal with’’.

“Jake Duffy, who has been breezing ours up for at least the past decade, says he’s not sure this bloke is the fastest we’ve ever had but he’ll definitely be the best we’ve ever offered,’’ Nolen said.

“He’s just the sort of horse who you don’t really feel like you’re going that fast on him, he’s very economical and he gets over the ground so easily but then when you look at the clock, you realise how good he’s going.

“He doesn’t act like a colt, nothing phases him, his temperament is perfect and he’s more like a 3YO who’s raced a few times he’s that strong and confident.’’

Nolen breezed five horses in total at Seymour and was impressed with all of them.

Baystone Farm’s Dean Harvey was similarly impressed with the nine juveniles he breezed at Seymour.

“We’ve always had a good opinion of her, she’s got a massive pedigree – an Easter pedigree – so I think she will appeal to a lot of the stud masters,’’ Harvey said.

“Shamus Award is going great guns at the moment and has a couple of live chances in the Caulfield Guineas too. This filly is a great sort with a great action so we’re really excited about her.

“Of the others, the Dundeel colt (ex Tang, lot 139, breezed in 10.62secs) is a really well-balanced horse, he’s probably been the pick for a little while, he’s well balanced and does everything so easily while the Astern colt (ex Vendanges, lot 155, breezed in 10.82secs) has grown into a lovely horse, is very fast, has a fantastic action and I’m loving the Asterns as a collective.’’

The Seymour action was followed by Eagle Farm, where an All Too Hard colt (ex Max It Out, lot 49) topped proceedings for KBL Thoroughbreds, recording a time of 10.33secs on the Good 4-rated dirt track.

The Inglis Ready2Race Sale has in recent years achieved the highest winners-to-runners ratio of any sale of its kind in Australasia.

Not only did this year’s G1 Doncaster Mile winner Nettoyer come through the Inglis Ready2Race Sale, since 2014 over 375 individual winners have emerged from the sale.

It has also been a significant boon for the Hong Kong market, with a stronger winners-to-runners ratio and greater average earnings per runner than any other Australian 2YO Sale in the same period.

Breeze ups continue at Warwick Farm on Friday where 93 juveniles will be put through their paces, before action heads across the Tasman on Monday for the Taupo breeze ups.

Videos of those breezes will be available at inglis.com.au on Sunday.

Inspections for the Inglis Ready2Race Sale – to be held as a live auction at Riverside Stables - begin on Friday October 16.