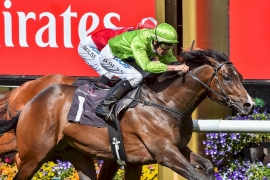 Inglis Digital’s first Online Sale of 2020 has opened for bidding, with a catalogue of 315 lots on offer over the next five days.

It’s Inglis Digital’s biggest catalogue since moving to twice-monthly auctions in August 2019 but the platform opted to revert to one sale in December and January to cater for the holiday season.

Two of the highlights are Stakes winners Royal Symphony (Domesday) and Paquirri (I Am Invincible), both entered in the stallion category.

Royal Symphony was a dual Listed winner and finished 4th in both the Caulfield Guineas and the 2017 Cox Plate behind Winx.

Paquirri is a son of dual Stakes-winning mare Miss Solis and won the G3 Kindergarten Stakes as a 2YO.

He is being offered as both a racing and stallion prospect.

• Tennessee Icestorm – half to Seabrook, in foal to Merchant Navy

• Flame of Love – Smart Missile half to Ocean Embers, in foal to Churchill

• Chi – Zabeel half to What Can I Say, in foal to So You Think

• Goodn’targ – Savabeel mare from the family of Hellbent, in foal to Invader with a Star Turn filly at foot

• Water of Life – half to The Cleaner, in foal to Needs Further

• Persia – Street Cry half to Lanigera, in foal to Shalaa with an Exosphere colt at foot

The 34 yearlings are representing stallions such as Better Than Ready, Capitalist, Choisir, Counterattack, Flying Artie, Pride of Dubai, Rubick, Stratum Star and Wandjina.

183 lots are being offered for unreserved sale and buyers should note that the minimum bid has been raised to $600.

The catalogue will open for bidding at 3pm (AEDT) Friday, January 24.

Prospective buyers are encouraged to conduct inspections and relevant vet checks over the next five days.