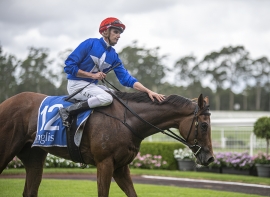 When Joe O’Neill from Prime Thoroughbreds attended the 2018 Classic Yearling Sale – the first ever sale at Riverside stables – he did so with a cunning plan.

O’Neill had an unraced Sizzling filly out of Senro Kisaki in his stable that was due to have her first public barrier trial that week but such was O’Neill’s opinion of the filly, he wanted to keep her away from the public eye in the hope of purchasing her Rubick half sister that was being presented at the Classic Sale by Edinburgh Park as lot 619.

She now races as Rubisaki and today she won the $1m Inglis Sprint at Warwick Farm.

It was her fifth win from seven starts for the Patrick Payne-trained filly, career statistics that have come as no surprise to O’Neill.

“I say to my clients ‘we’ve got to buy athletes, not show ponies’ and this filly is an athlete who I always thought would go early and she has,’’ O’Neill said.

“We go out to buy athletes and to be honest we’ve had a lot of success doing that.

“At Classic two years ago, we knew what we were doing. We knew this filly was in the sale so we held the other one back from trialling until after the sale so we could buy Rubisaki at a more reasonable price.

“We liked the look of her and it’s all fallen into place.’’

Rubisaki was buried in the back half of the field today and looked to be in trouble upon straightening but a masterful ride from Billy Egan saw her secure a comfortable win in the end, defeating Rari and True Detective.

“It’s a fantastic thrill for me and the owners, for Patrick Payne, Billy Egan, the breeder Ian Smith and everyone involved,’’ O’Neill, who purchased four horses at this week’s Classic Sale, said.

Ian Smith of Edinburgh Park, who bred and sold Rubisaki, always thought she would be an early running type.

“Edinburgh Park are well regarded in the industry because our horses run. It’s been proven time and again and Rubisaki is another example of that.’’

Rubisaki may now target the G1 Surround Stakes at Randwick on February 29.

Should she win that, she would become the seventh G1-winning Inglis 3YO this season.