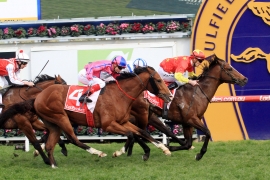 The Snowdens continued their healthy affliation with the Group 3 Vain Stakes on Saturday, winning this year’s edition with unbeaten colt Russian Revolution, who led throughout.

Under the guidance of Mark Zahra, the Peter and Paul Snowden-trained Russian Revolution ($1.95 favourite) defeated Highland Beat ($9.50) by a long neck with Hardham ($13) a short head away in third, both minor placegetters closing from rearward positions.

“He had to do it out there on his own, they all had their chance to get him but couldn’t,” said Jackson Beirs, stable manager of Snowden Racing.

“He’s a brilliant horse that’s still learning his trade and will improve a lot from this run."

Beirs suggested Russian Revolution would have his next start in the Group 3 McNeil Stakes (1200m) at Caulfield on August 27.

Peter Snowden, when head trainer for Darley’s Australian operation, won the Vain with Sepoy (2011) and Safeguard (2013).

The Group 3 race over 1100m for colts and geldings is a traditional starting point for Caulfield Guineas aspirants and there were several pleasing first-up performances from Highland Beat, Hardham and Valliano ($11, fourth).

Craig Williams described Highland Beat, who ran the quickest final 200m of the Vain, as ‘gallant in defeat’ after racing wide for the majority of the race from barrier three.

Damien Oliver said Hardham was ‘good through the line’ and that was supported by sectional times with his mount running the fastest final 600m.

Damian Lane, who rode Valliano, said his mount raced ‘a little bit keen’ and found his rivals too slick over 1100m.

“But on the line he was picking up again so a little bit further for him and he’ll be around the mark,” Lane said.

Russian Revolution was a $320,000 purchase by China Horse Club from Vinery Stud's draft at the 2015 Inglis Australian Easter Yearling Sale