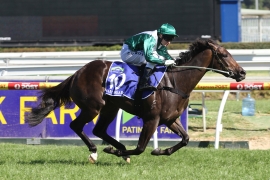 Champion sprinter Samaready and G2 winner Spanish Reef are among the latest additions to an already stellar collection of mares for the upcoming Inglis Chairman’s Sale.

A winner of the G1 Blue Diamond Stakes and G1 Moir Stakes, the Vinery Stud-consigned Samaready, also an Inglis Easter Yearling Sale graduate, has already produced three-time Stakes-winning filly Exhilarates and is offered back in foal to her sire Snitzel.

Vinery’s Adam White was wholesome in his praise of Samaready (pictured), saying: “She is one of those very rare gems that performed at the highest level on the track before proving herself as an elite producer.”

Multiple Stakes-winning mare Spanish Reef will be offered by Fernrigg Farm, As Agent, for the sale on Friday, May 8.

The 6YO daughter of Lope de Vega was a winner of the G2 Sunline Stakes, G3 Schweppervescence Trophy on two occasions and the G3 Ladies Day Vase, as well as being G1-placed behind Melody Belle in the G1 Empire Rose Stakes.

“Spanish Reef was easily the best mare I have ever trained,” trainer Ken Keys said.

“She was a genuinely top-class performer. For the record, of her last 26 starts, 24 were at Group level and she had a 50% strike rate for a top 4 finish, which speaks volumes for her talent and consistency.

Spanish Reef will be available for inspection at Fernrigg’s Richmond Grove property from Thursday, along with their other offering, Stakes-winning mare Shigeru Sendan, who is in foal to Trapeze Artist.

“It’s a privilege for the farm to be offering mares of this quality at a sale like the Chairman’s,” Fernrigg Farm’s Rae-Louise Kelly said.

“Spanish Reef was a fantastic race mare and has all the credentials to be a top broodmare while Shigeru Sendan is a beautiful mare producing quality stock – we’ll have her Merchant Navy colt foal, who is outstanding, available for inspection at the farm also.”

The Chairman’s Sale will take the format of a Virtual Auction with online and telephone bidding, like the recent Easter Yearling Sale.

The sale will begin at 3pm on Friday May 8 at inglis.com.au.