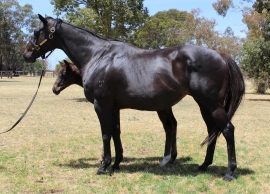 The $1m barrier has been smashed by Inglis Digital for the seventh consecutive time since switching to twice-monthly auctions, with a 156-strong November (Late) catalogue turning over an incredible $1.3m.

An 85% clearance rate was recorded for the tried horse category, with 80 of the 94 racehorses (including race fillies) selling at the conclusion of the sale on Wednesday evening.

But it was the broodmare category that again topped the Online Sale, with $105,000 realised for More Than Ready mare More Glory.

Owned by Roger Sousa’s Platinum Racing & Breeding, More Glory was offered by Dave Mee’s Pinhook as agent, in foal to Denman and with a colt at foot by Arrowfield Stud’s first-crop sire Pariah.

The 10YO mare, who has produced exciting Hong Kong galloper Tornado Twist (Denman), was snapped up by Victorian-based Gary and Yvonne Hutchins of Catalina Pastoral.

“My wife and myself have a small band of broodmares and while I always take a look at each catalogue, this is the first time we’ve purchased online,” Gary Hutchins said.

“She’s in foal to Denman and I have a good Denman mare at home – plus More Glory comes with a Pariah at foot which is a big bonus.

“I was also heavily encouraged by my wife to buy her – she loved the look of the mare too – so we had someone go and inspect her – I must say it was both nerve-wracking and exciting for us at home during the bidding process.

“I found the whole process very good and as a matter of fact we might look to sell a couple of mares on the platform in the future now.”

Sharing second-top lot honours at $85,000 was classy 3YO Aussie (Snitzel) – a half brother to Starspangledbanner – who sold to BBR Bloodstock along with 4YO mare Heaven’s Deal (Spirit of Boom).

Heaven’s Deal, winner of the Listed Queen Adelaide Stakes as a 2YO, was bought by Fernrigg Farm for $85,000.

Out of a half-sister to Diamonsondinside, Heaven’s Deal was offered by Richard and Chantelle Jolly.

“We thought she would make around that mark, we chose to put her to market now or the other option was to retain her until next year,” co-trainer Richard Jolly said.

“We’ve sold half a dozen on Inglis Digital, the whole online revolution is one of the best things to have happened in the last few years when it comes to trading bloodstock.”

Dual-winning Pierro gelding Jenkins was another strong result in the tried horse section, selling to Regal Bloodstock Pty Ltd for $70,000, while the Lindsay Park Racing-consigned G3 winner Muraaqeb sold for $65,000 to Hastings Bloodstock.

Also reaching the $65,000 mark was Chicago Bull (Exceed and Excel), a three-quarter brother to Zululand, who was offered by Aquis Farm and purchased by Define Bloodstock.

“We’re delighted with the result of Chicago Bull, he’s off to Singapore to Richard Lim, a new up-and-coming trainer who Aquis has a good relationship with and we wish the new connections all the best with the horse,” Aquis Racing and Bloodstock Manager Brian McGuire said.

“Aquis also offered Kittie Kins (in foal to Brave Smash) in the November (Early) Online Sale, she sold for $245,000 so we’re having great success with the Digital platform, it’s efficient, effective and transparent for both the vendor and purchaser.”

Out of 17 Inglis Digital Online Sales to be held in 2019, November (Late) is the 14th catalogue to gross more than $1m, with this sale recording a clearance rate of 71%.

CLICK HERE to view the full catalogue and results from the November (Late) Online Sale.

Due to the holiday period, Inglis Digital will hold only one Online Sale in December and one in January.

Entries are now open for the December Online Auction, with entries closing at midnight (AEDT) Wednesday December 11, with the sale to run December 13-18.