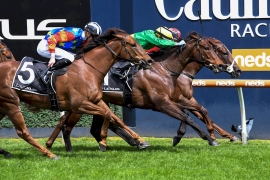 Savatoxl and Lombardo – both known winners – will clash in the G1 Manikato Stakes in 13 days following their wins today.

Savatoxl (Kuroshio), first up since contesting the Stradbroke Handicap in June, led in an Inglis graduates’ Stakes trifecta in the G2 Schillaci when he beat Dosh and Bella Nipotina.

It’s a phenomenal return on investment, after the Alice Springs Turf Club paid just $8000 for him at the Inglis Gold Yearling Sale, where he was offered by Stonehouse Thoroughbreds.

“A 17th win, what a culture that is,’’ Tony McEvoy said of Savatoxl, who claimed a maiden G1 victory earlier this year in the Goodwood Handicap.

“I thought he may have needed that run today but it just shows you how tough he is.

“The guys in Alice Springs, they have such faith in this horse and I’m so pleased they made the phone call to send him down to us.’’

Savatoxl (pictured) is bred by Carrington Park and will aim for a second career G1 win next start in the Manikato Stakes at Moonee Valley on Friday October 22, for which he is now a $7 equal second favourite with Lombardo with TAB.

Today’s Listed Village Stakes was a third consecutive win – and sixth overall from just 10 starts - for Lombardo (I Am Invincible), a $300,000 Inglis Premier Yearling Sale buy for his trainers Mick Price and Michael Kent Jr, along with Aquis.

Lombardo was offered at Premier by Cathy Hains’ Burnewang North, who co-bred the galloper alongside Orpheo Pty Ltd.

Hains stayed in the ownership of the talented 5YO, which sports the Burnewang racing colours.

“The horse is thriving. This race was the build-in to possibly running in the Manikato, so why not?’’ winning co-trainer Price said.

“He’s handled Moonee Valley, he likes to get his toe in, he’ll run along, he’s got a big stride.

“I think it’s great for Cathy Hains. After the sale she said, ‘I’ll take it home to my property and spell it for three or four months for no cost’, hence it’s got her colours on so I’m very happy for her, she really backed her horse.’’

For Sneaky Five (Fastnet Rock), today’s win in the G3 Thoroughbred Club Stakes kept her unbeaten career record intact, following wins in the $500,000 Inglis Banner on debut and then the $1m Golden Gift, both as a 2YO.

Trained by Ciaron Maher and David Eustace, Sneaky Five is a $305,000 Inglis Premier Yearling Sale buy for Rosemont, from her breeder Goldin Farms.

Sneaky Five has now earned her connections more than $1m in earnings and will no doubt prove a worthy and valuable member of the Rosemont broodmare band in time.

And Dirty Thoughts (So You Think) continued to prove one of the most consistent horses in training with her win when securing a deserved first Stakes success in the G3 Northwood Plume Stakes.

It’s a fifth career win at start No.12 for Dirty Thoughts, who has also finished third on five occasions and takes her overall earnings to $335,000.

Her trainers Mathew Ellerton and Simon Zahra paid just $16,000 for her at the Inglis Premier Yearling Sale, where she was offered by Phoenix Broodmare Farm.

An Inglis Easter Yearling Sale graduate from Vinery Stud, Mirra Vision is out of the Stakes-winning mare Mirrasalo, with today’s win taking her earnings to almost $450,000 from seven career wins from 18 starts.

Later in the day at Eagle Farm, Honorable Spirit (Charm Spirit) gave the Inglis Digital platform another Stakes winner when taking out the Listed Queensland Cup.

In defeating Lunasnit, it gave the online platform a Stakes quinella, with both being purchased within a month of each other last year.

The October (Early) Online Sale is now open for bidding and will begin to close from midday on Wednesday.

And the Listed Debutant Stakes at Caulfield for the 2YOs was a fantastic result for Aasish Kapadia and Mind Blowing Thoroughbreds when Kiki Express (Sepoy) was victorious on debut.