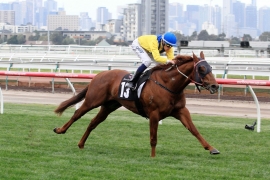 As a brother to Group 1 Lightning Stakes heroine Snitzerland, much was expected of Sooboog, but the son of Snitzel has often been the bane of punters as well as owner Sheikh Mohammed Bin Khalifa Al Maktoum who shelled out $1.5 million to secure the chestnut as a yearling.

When the 4yo entire lined up for Saturday’s $150,000 Group III Aurie's Star Handicap (1200m) he had won just two of his 14 starts, which included eight fruitless attempts at stakes level where he had teased with runner-up efforts in the Listed Breeders Plate at Randwick, Listed Goodwood Racecourse Trophy at Flemington and Group II Euclase Stakes at Morphettville.

Under a positive ride by Michael Dee, Sooboog hit the front 300 metres out down the straight six at Flemington and was never in danger, keeping up a solid gallop to defeat Dibayani (Shamardal) by 1 3/4-lengths with Tashbeeh (Commands) a short neck away third.

"The race worked out just like we planned, he relaxed well but still travelled strong throughout, he gave a really good kick at the 400 and was too strong,” Dee said.

"I reckon the horse has been running well and just needed to get things go his way, Weir said.

"He got the right conditions, began well and raced properly for once. "He didn’t get his head up and over-race, he got into a good rhythm and when he can do that he’s got a great turn of foot. He’s a really good galloper, he’s shown that at home We knew one day that when things fell into place that he would do something like that and hopefully he can continue on now.

"He’s a Group III winner now and that’s important because he is still a colt, it’s great for the owners as well.

"We’ll look at targeting another good race with him in the spring, I can't see any reason why he can't get a strong 1400 (metres).

"He’s had a really good day out and hopefully he can go on with it now.”

Purchased for $1.5 million by Sheikh Khalifa out of the Arrowfield Stud draft at the 2014 Inglis Easter Australian Yearling sale, Sooboog is the sixth foal of the unraced Fraar mare Monte Rossa.

A sister to the grand racemare Nina Haraka, Monte Rossa has outdone her more famous sibling at stud.

All seven of her foals are winners headed of course by Snitzerland.

A $125,000 Inglis Premier Yearling, Snitzerland went on to win almost $2 million. Runner-up in the Group 1 Golden Slipper and Group 1 The Galaxy, Snitzerland won eight of her 20 starts including the Group 1 Lightning Stakes, two at Group II level and three at Group III level.

After not having a live foal in the two seasons following Sooboog, Monte Rossa produced a Snitzel filly last spring and was bred back to Arrowfield’s rising superstar.

Sooboog (pictured as a yearling) becomes the 40th stakes-winner for Snitzel who will command a fee of 110,000 at Arrowfield Stud this spring.