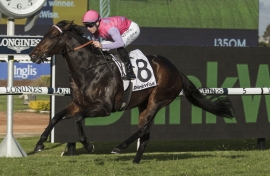 The success comes on the eve of a return to physical auctions, with Inglis to host the southern hemisphere’s first live horse sales since the COVID-19 pandemic with Easter Round 2 and the Scone Yearling Sale at Riverside Stables next Sunday (July 5).

The pair of 2YOs entered the race undefeated and Mount Pleasant announced himself a rising star of South African racing with a strong win in the juvenile feature.

Form Bloodstock purchased the Makybe-bred Mount Pleasant for $90,000 at Premier from Two Bays Farm, with he and Najim Suhail putting a gap back to the third placegetter.

The international successful was one of many Stakes victories for Inglis graduates over the weekend, which also included:

*Trumbull, who proved himself another Inglis Ready2Race Sale pinhook success when victorious in the Listed Civic Stakes at Rosehill.

He was initially purchased at the Classic Yearling Sale – where Sledmere Stud offered him - for $65,000.

He then breezed up and was sold as a 2YO at the Ready2Race Sale for $125,000 to Kim Waugh, who trains the horse today.

Bred by Chris Grace, Trumbull has now won six of his 18 starts for almost $350,000 prizemoney - another fantastic ROI from the country's best 2YO sale.

Trumbull (pictured) was one of several positive results for the Ready2Race Sale, which also saw a big win for Double Take (Declaration Of War) at Sha Tin.

Pinhook specialist Damien Lane purchased Double Take for just $20,000 at the Classic Yearling Sale from Murrulla Stud, before onselling him for $200,000 to HK trainer Caspar Fownes.

Entries are now open for the 2020 Inglis Ready2Race Sale, to be held at Riverside Stables on Tuesday October 20.

The former Godolphin galloper was a $30,000 purchase from the January (Early) online auction for Jorgensen Racing.

Since then, Inquiry has raced eight times for six wins, one second and one third and earned more than $150,000 in prizemoney.

Entries for the Inglis Digital July (Early) Online Sale are now open and will be so until Wednesday July 8.

To enter a horse for the sale – which is scheduled to run from July 10-15 - CLICK HERE.

*Another Dollar, whose strong winter carnival continued with a second Stakes success, this time in the G3 Premier’s Cup at Doomben.

Trainer Chris Waller bought Another Dollar at the Easter Yearling Sale for $190,000, where she was offered by Waikato Stud, who also bred the mare.

Easter Round 2 will kick off a big week of live auctions in Sydney from next weekend (Sunday July 5), which will also include the Scone Yearling Sale (July 5), Australian Weanling Sale (Wednesday July 8) and Great Southern Sale (Thursday July 9), all at Riverside.