Spilt cleans them up in Inglis Challenge 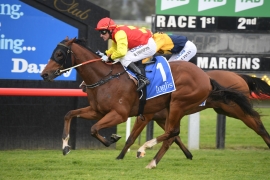 A $2000 yearling that reminded Rod Northam of former stable star Big Money provided the trainer with his fifth victory in today’s $100,000 Inglis Challenge at Scone.

Moments after Spilt (Choisir x Mycup Runneth Over) had claimed the 2YO feature on Day 1 of the Scone Cup Carnival, he reflected on the first time he laid eyes on the then-colt at White Park 12 months earlier.

“He was a typical Choisir and had a remarkably similar build to Big Money – another son of Choisir – so I decided to buy him,’’ Northam said of the Lauri Macri-bred youngster.

“From that point on we targeted this race and it’s always a great feeling when long-term plans come off.’’

Northam, who received a pair of Swarovski Optik binoculars for training a winner of an Inglis Race Series race, said he hoped Spilt could turn out “half as good as Big Money’’, a fellow Scone Sale graduate who won five Stakes races and more than $800,000.

Vendor Rae-Louise Farmer of Fernrigg Farm described Spilt (pictured) as “such a dude’’.

“He was the best horse to prep for a sale, nothing was even an issue, he was such a good doer and I always thought he’d make it as a 2YO,’’ Farmer said.

“This is a great result for the farm.’’

The Inglis Race Series continues at Scone tomorrow with the running of the $300,000 Inglis 3YO Guineas, for 2017 graduates.

Attention then moves to White Park on Sunday for the annual HTBA Scone Select Yearling Sale, for which 204 yearlings have been catalogued.

Progeny of 71 sires including Not A Single Doubt, Dundeel, Brazen Beau, Sebring, Written Tycoon, Hinchinbrook, So You Think, More Than Ready, Deep Field, Nicconi, Rubick, Smart Missile, Star Witness, All Too Hard and Tavistock are among the catalogue, as are first season offerings by the likes of Exosphere, Press Statement, Kermadec, Super One, Scissor Kick, Headwater, Real Impact, Bull Point, Outreach and Panzer Division.

The sale will begin at White Park at 10am.

Inspections begin from 8.30am tomorrow at White Park.

There is also an online sale running at present to complement the yearling sale.

The Scone Online Thoroughbred Sale has attracted a quality catalogue of 146 broodmares, weanlings, yearlings and racehorses.

Bidding has begun and the ‘final countdown of bidding’ will begin at 5pm this Monday, May 13.