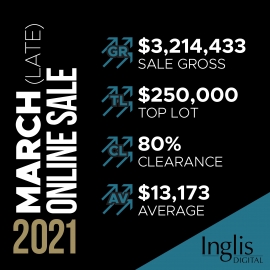 Larneuk’s Neville Murdoch was thrilled with the outcome for both fillies.

“We’re very happy, the Inglis team did a great job getting it all done,’’ Murdoch said.

“I didn’t want to take them all around the countryside to get them to a sale so I thought I’d go online with Inglis Digital and it’s been a great success.

“You get so many really good results on there and these are no different.

“Both these fillies are really nice horses and will give their new owners a lot of fun and I’m hoping I’m sitting here in a few months watching them win Group 1 races and I can cheer them both on.’’

ML Stables’ representative Dick Inskip described Wolves as “a star of the future’’.

“It’s very exciting for our team to get a filly like this. We’ll get her home, give her a spell and have a look at her and the team will decide what we do with her after that,’’ Inskip said.

“Anthony Mountney will train her, we’re thinking at this stage getting back to Melbourne in the spring over 1400m because we’re sure she’s a carnival horse but we won’t rush into any decision.’’

Wolves wasn’t the only leading purchase for ML Stables, who also secured the third-top lot Oblique for $130,000.

“Oblique came to us highly recommended, Anthony has seen him race a few times and was keen to get him into the stables,’’ Inskip said.

“We’re regular users of the Inglis Digital platform, we think it’s great and so easy to use.’’

Wanaroo – a last-start third-place getter in a Listed race at Flemington during the autumn carnival for Greg Eurell – will now be trained by Symon Wilde in Warrnambool.

“It’s a growing relationship, Symon is a fantastic trainer and we enjoy working with him so he’ll take this filly, give her a break and get her ready for the spring, maybe for a race like the Thousand Guineas,’’ Pinhook Bloodstock’s Dave Mee said.

“This filly is lightly raced and has it all ahead of her. She has run some very nice sectionals against quality opposition so there is a lot of upside there with her we think.

“Plenty of good horses have been sold through Inglis Digital and we’re convinced this is another – the online model works, it’s so simple and it’s here to stay and it’s such an easy way to buy or sell a horse.’’

In total in the March (Late) Online Auction, four horses sold for $100,000 or more, taking the amount of six-figure lots to sell through the platform since 2018 to 95.

Entries are now open for the April (Early) Sale and will remain so until next Wednesday, April 7.