Star 3YO Classique Legend confirmed for The Everest 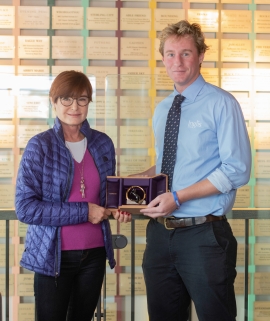 Bon Ho & Carmel Size Racing have purchased the vacant GPI Racing slot for the 2019 running of The Everest.

The Les Bridge-trained 3YO has been selected to fill the slot for The Everest, which will be run at Randwick on Saturday October 19.

The sale of the GPI Racing slot attracted global interest from the outset owner Greg Ingham announced he was selling it for the 2019 renewal of the race.

“The decision to aim Classique Legend at the Everest later this year should be seen as a vote of confidence in the Australian racing industry, with special acknowledgment to Racing NSW who have developed the initiative,’’ Size said.

“Mr Bon Ho is a devotee of racing and as much as he would love to see his horse winning in Hong Kong, he is relishing the challenge of tackling the best in The Everest.

“It is even more satisfying to have purchased the GPI slot from Inglis, as that is where Classique Legend was purchased.

“Les Bridge is particularly excited at the news and while we acknowledge Classique Legend will need to go to the next level, we have every faith in his ability which Les believes is still untapped.’’

Inglis Managing Director Mark Webster was thrilled to learn Classique Legend would remain racing in Australia and be given a chance at the world’s richest turf race.

“Classique Legend has won three of his four starts including a Group 2 during The Championships and is yet another example of the growing success of the Inglis Classic Yearling Sale, which he topped in 2017 as part of the inaugural Gold Riband session,’’ Webster said.

“It’s fantastic he has been given the chance to conquer The Everest, following on from the success of fellow star Inglis graduate Redzel having won the past two years.

“Bon Ho and Carmel Size are huge supporters of the industry and I wish them the very best of luck in their pursuit of Everest glory.’’

Racing NSW CEO Peter V’Landys said: “It was always envisaged that the slots in The Everest would be tradeable and we welcome Carmel Size and Bon Ho into what is one of the most exciting and publicised sporting events in Australia.

“With prizemoney of $14m it’s potentially very good value for an owner of a horse that may be otherwise a fringe contender, such as Classique Legend, to get a start in the race.’’