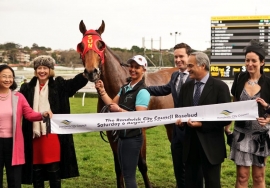 History was made at Randwick on Saturday when the new training partnership between Gai Waterhouse and Adrian Bott tasted their first success with exciting Snitzel colt Thronum carrying the Sun Stud colours to victory in the Listed ATC Rosebud.

A winner at his first two starts in June and July, Thronum finished second to highly regarded colt Tango Rain at his most recent run on July 23.

Fit and well-seasoned for this 1200 metre sprint, he handled the heavy 10 conditions with quiet determination for Tommy Berry and held on gamely at the finish to outgun Smart Missile colt Mediterranean to win by a head with Miss Beneteau in third place.

The overall time of 1:15.75 told the story of just how heavy this track was.

"We thought if he jumped cleanly and took control of the race they wouldn’t catch him,” said Gai Waterhouse, who then quickly encouraged Adrian Bott to take the spotlight.

"It’s an incredible way for us to start off,” said a delighted Bott.

"I couldn’t be happier!

"The long range plan is the Golden Rose (Group I September 10) and he’s a colt that keeps improving.”

A $300,000 Inglis Easter purchase from the Highgrove Stud draft for Sun Bloodstock, Thronum has three wins and a second from four starts with prizemoney of $162,750.

Bred by Highgrove Stud in partnership, Thronum comes with an impressive international pedigree as he is the second winner for Helena’s Secret (USA), whose dam is a half-sister to champion racehorse and sire Street Cry (IRE), while top class sire Shamardal (USA) is another close relation.

Helena’s Secret has a yearling filly by Sebring and will foal again to the Golden Slipper winner this spring.