Sweet success in The Hunter for Thompson mare 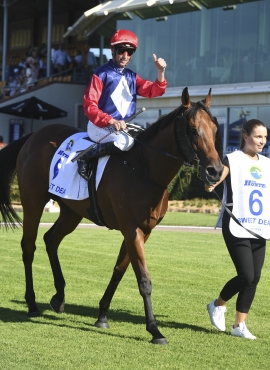 The John Thompson trained mare, already a dual winner in group company, took her earnings past the $1.35m mark with today’s effort.

Sweet Deal was a $67,500 purchase by Boomer Bloodstock from the draft of Lincoln Farm at the 2016 Inglis Classic Yearling Sale.

For Mick Talty of Edinglassie Stud, where Sweet Deal was bred and raised, her success has come as no surprise.

“From an early age I felt that she was a filly that was going to mature into a good race mare and John Thompson and his team have done a wonderful job with her,” said Talty.

“Sweet Deal was bred by Pip Cooper, who is a fantastic supporter of our farm, so this is a particularly satisfying result and I think there might still be better to come from her in the Autumn.

“She is another quality racehorse to carry our ‘target’ brand which is again going to be well-represented at each of the Classic, Premier and Easter Yearling Sales in 2021” added Talty.

Boomer Bloodstock’s Craig Rounsefell was instantly taken with Sweet Deal when he first saw her as a yearling.

“She was a lovely, big, scopey filly with a massive girth and a quality head and eye,” Rounsefell said.

“I am delighted for loyal clients CJ Stone, her mother Julie and all the other owners in the group.

“Every year I am given the task to purchase one yearling in the $40,000 to $70,000 range for the syndicate so it has been quite the ride having a mare as good as Sweet Deal.

“I always seek out the Edinglassie brand as they consistently breed sound, tough racehorses.

“And I love working the Inglis Classic Sale as it consistently throws up high-quality racehorses that you can buy at great value.”

Sweet Deal joins other Classic Yearling Sale graduates like Classique Legend, It’s Me, Fiesta, Hit The Shot, Dosh and many others in performing with distinction so far this season.

Inglis graduates have now won 17 $1m-plus non-resticted races on the Australian calendar for 2020, almost double the tally of the competing Australian auction house.

Meanwhile at Sandown, promising 3YO gelding Allibor (All Too Hard x Libor Lady) broke his maiden in a thrilling finish to the $250,000 G2 Sandown Guineas over 1600m.

The Symon Wilde-trainee had been noted as a horse to follow with an eye-catching effort behind Shelby Cobra in stakes company at Flemington 7 days ago and backed up that strong impression with a gutsy effort here.

Wilde had purchased Allibor in conjunction with Cameron Cooke for $60,000 from the Blue Gum Farm draft at the 2019 Inglis Premier Yearling Sale and retained him when he failed to meet his reserve when offered at the Inglis Ready2Race Sale of the same year.

“He is still very raw and I think there is a hell of a lot of upside to him,” said Wilde.

“He didn’t see the horse to his inside till very late on but responded when he did and he’s exciting.

“I liked him a lot as a yearling and one of the partners suggested that with his pedigree he might be a popular horse in Hong Kong and that we should give the breeze-up sale a go.

Allibor continues a stellar run of success for graduates of Inglis Ready2Race sales, joining stakes winners Trumbull and Wishful Thinker amongst a host of recent winners.

“I was delighted when Symon Wilde bought him at the sale and I’m very pleased to see Symon still in his ownership as he and his father have been very good supporters of ours,” said Blue Gum’s Philip Campbell.

“I believe he’s a first stakes winner for his breeder, Simon Raleigh, and hopefully he can progress to greater heights in the Autumn and beyond.

“He’s a good example of what we try to do here on the farm, breed good, tough, sound racehorses and we are looking forward to presenting another quality draft at the Inglis Premier Sale in 2021.”

Also at Sandown, 7yo Tom Dabernig & Ben Hayes trainee So Si Bon (So You Think x Black Minx) showed plenty of resilience to claim a narrow victory in the G3 Eclipse Stakes over 1800m.

Bred by Robert & Barbara McClure of Morning Rise Stud, So Si Bon is now a triple stakes winner having been purchased for $250,000 from the Newgate Farm draft at the 2015 Inglis Easter Yearling Sale.