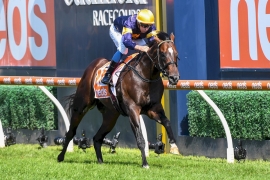 He had the ‘wow factor’ at the Easter Yearling Sale and today, exciting 3YO Alabama Express (Redoute’s Choice) proved himself one of the most sought-after stallion prospects in the country with a devastating victory in the G1 CF Orr Stakes at Caulfield.

Having just his seventh career start, the colt took on the older horses at Weight For Age for the first time and asserted himself as the latest star in what is a stellar 3YO crop.

He also becomes the sixth G1-winning Inglis 3YO this season and is one of 29 individual Inglis Stakes-winning 3YOs of the season so far.

Purchased by Paul Moroney Bloodstock at the 2018 Easter Yearling Sale at Riverside from the Arrowfield Stud draft for $280,000, Alabama Express (pictured) has now won four of his seven starts for over $500,000 in prizemoney – and his value as a stallion prospect is many, many multiples of that.

“He was a gorgeous colt when we bought him here at Easter at Riverside, he was my standout for the sale and Mike saw him and just went ‘wow’,’’ Paul Moroney said at Riverside today, where he has spent all week inspecting yearlings for the Classic Sale, which begins at 10am tomorrow (Sunday Feb 9).

“We just wondered if we’d have enough money to buy him but we got him and it’s all worked out well. He’s now a Group 1-winning colt by Redoute’s Choice and worth a heck of a lot of money as a result.

“It’s a nice position to be in. It’s why you buy these Classic-looking colts by the right stallions. If you get it right there’s a lot of money out there for it.

“It secures the future not only for the horse but the ongoing business of the stable.’’

Moroney was unsure what Alabama Express’s racing future held after today’s win but knew one thing for sure – his future career as a stallion was now all-but secured.

“He’s co-owned by Arrowfield so he’s probably got a home there any day he wants one but there’s a lot of other studs out there that would love to have him as well,’’ Moroney said.

“I know we’ve already had a lot of interest in him from New Zealand pre this race today.

“Arrowfield obviously have the front running but do they need another son of Redoute’s Choice? Maybe they do after Not A Single Doubt was retired recently but it will all be worked out between the owners and Arrowfield. It’s a nice position to be in.’’

Arrowfield’s John Messara said: “It means so much to us to see this beautiful colt win the Orr today, the same race his sire Redoute’s Choice won as a 3YO almost exactly 20 years ago.

“This final stage of Redoute’s Choice’s career as a sire is proving to be the most exciting time of all and there’s so much still to come with his progeny, and of course, his sire sons and broodmare daughters.

“Great credit to Mike Moroney to get this result, we’re absolutely delighted for him and thrilled to be part of the ownership, along with his breeder Jonathan Munz and Rupert & Cheryl Legh.

“The icing on the cake is that Alabama Express becomes Arrowfield’s 13th Group 1-winning Easter graduate since 2013, something we’re all extremely proud of.’’

Earlier on today’s Caulfield program How Womantic (The Wow Signal) kept her unbeaten record alive with a powerful victory in the G3 Kevin Hayes Stakes.

Bred by Rob and Maureen McBryde of Summerset Park Stud in South Australia, the 3YO filly from the Ciaron Maher and David Eustace stable is now a Stakes winner and has won all four of her starts, with her prizemoney exceeding $300,000 already.

Brad Spicer of Spicer Thoroughbreds purchased How Womantic for $50,000 at the Premier Yearling Sale, where she was offered by Sun Stud.

And Miss Siska resumed a winner when comfortably saluting in the G3 Carlyon Cup at Caulfield.

Having her first run since finishing second in the Sandown Classic at the tail end of the spring carnival, Miss Siska stalked the speed today and proved too strong, being eased down in the latter stages by jockey Damian Lane for an easy win.

Miss Siska is a graduate of the 2015 Easter Yearling Sale, where she was offered by Vinery Stud.

Inspections for the Classic Yearling Sale continued at Riverside today, with a large volume of buyers inspecting around the grounds at Riverside.

The Classic Sale begins to 10am tomorrow (Sunday) and runs for three days.