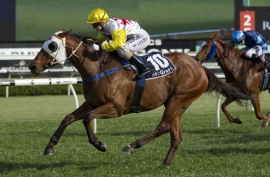 Stakes results in Australia and South Africa yesterday have thrown the spotlight on the Inglis Australian Broodmare and Weanling Sale that features the dam of Group 2 South African Fillies Nursery winner Fursa.

Red Princess, the dam of Fursa, is set to be offered as Lot 467 on Day Three of the Inglis Australian Broodmare and Weanling Sale that starts at 10am today. The daughter of Red Ransom was served last season by top sire Snitzel and will be sold on account of Middlebrook Valley Lodge as agent.

Other broodmares with significant updates from yesterday’s races include Safe (Lot 479). The stakes placed daughter of Strategic is the dam of Unbreakable, which saluted at Caulfield for owners Godolphin. Safe will be offered by Swettenham Stud.

Casino Dancer, which will be sold by Booralie Stud as Lot 554 on Tuesday, added to her impressive race record with a strong third placing behind Amovatio and Mighty Lucky yesterday in the Group 3 Hawkesbury Gold Cup.

Davali Thoroughbreds offer weanling Lot 55 this morning, a filly by Al Maher from Grand Acclaim, a half-sister to Amovatio. While the fourth and final day of this week’s sale includes Grand Acclaim herself selling as Lot 779 having been served by Verranzano last September.

Flying Jess’s win in the Group 3 SAJC Sires' Produce Stakes has added more black type to the pedigree of Lot 701, Come Fly With Me, which is a stakes winning half-sister to Flying Jess’ dam Martiess.

Group 3 Hawkesbury Guineas winner Spill The Beans features in the pedigrees of five mares being sold as part of the Gooree Park Stud reduction this week; Lots 215, 223, 228, 236 and 863.

Complete pedigree updates to the 2016 Inglis Australian Broodmare and Weanling Sale can be found online HERE. All four days of sale will be broadcast on Inglis Sale Day Live.

Online bidding and Inglis’ Make-An-Offer Services will also be available over the duration of the sale. The online catalogue can be viewed at inglis.com.au and via the Inglis Sales iPad App.

In addition to Fursa, other Inglis graduates to win at stakes level on Saturday included Fell Swoop, Spill The Beans, Howard Be Thy Name and Nancy, while Swear took out the juvenile contest at Hawkesbury. Read more about their success HERE