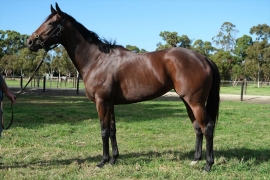 Well-related mare Hummalong is set for a date with Trapeze Artist after Bert Vieira went to $190,000 to secure the daughter of Hallowed Crown in the Inglis Digital April (Late) Online Sale, which concluded with a gross of $3.6 million this evening.

A half sister to unbeaten Stakes-winning 2YO Tycoon Humma (Capitalist) and multiple Stakes-winning Humma Humma (Denman), both graduates of the Inglis Premier Yearling Sale, Hummalong could receive another black type boost to her pedigree on Saturday when Humma Humma lines up in the G1 Robert Sangster Stakes at Morphettville.

Vieira – a long-time supporter of Inglis Digital platform – also purchased Zaberlarina for $90,000, with the winning daughter of Bel Esprit also set for a Trapeze Artist cover this coming season.

“Those two mares really stood out to me,” Vieira said.

“Hummalong is from a very good family, a current family and I thought if I can buy it, it’ll be a bonus if the family can add more black-type especially a G1 this weekend.

“The Zoustar yearling half sister made $600,000 at Inglis Premier earlier this year, so I think there is plenty to come with the pedigree.

“Both Hummalong and Zaberlarina have pedigrees free of Danehill and will go to Trapeze Artist this Spring at Widden Stud.

“I’ve been trading with Inglis Digital since the platform began in 2017, I am always looking at the catalogues, even if just to monitor what the market is doing and now it’s obviously very strong.”

Vieira returned later in the sale to purchase Fabulous Fran for $30,000, with the half sister to G1-winning Inglis Digital graduate Bella Valla offered by Segenhoe Stud.

Other results included 3YO gelding Duke Caboom (More Than Ready) who was offered by Archie Alexander (as agent) and bought by international buyer KK Bloodstock for $105,000, 2YO colt Civil War (Choisir) was purchased by Australian Bloodstock from Newgate (as agent) for $95,000 and the Yulong-consigned gelding Norway (Galileo) made $80,000, when bought by Lee Ann Imoden/Ciaron Maher Racing.

“This is the seventh catalogue from eight so far this year, that has grossed in excess of $2 million,” Business Manager Nick Melmeth said.

“It’s incredible to have reached the $20 million dollar milestone in just four months, when you consider how busy the first half of the year is with live sales.

“It’s not hard to reason why the platform is so successful however, when you consider that over 675 races in Australia have been won by Inglis Digital graduates since the start of the year.

“It proves that Inglis Digital continues to be the industry leader in online Thoroughbred auctions in every respect.”

To view the full catalogue and results, CLICK HERE.

Entries close for the May (Early) Online Sale at midnight next Wednesday, May 5