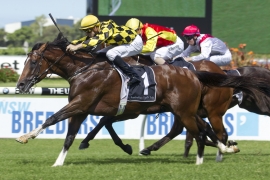 Siblings to the winners of the Chairman’s Stakes and Three Troikas Stakes will also be offered at upcoming Inglis Select Yearling Sales.

Sacred Star (Flying Spur x Irish Nova) won the Group 1 Waikato Sprint at Te Rapa over 1400m on Saturday. This is the second win this preparation for the Tony Pike trained galloper which was a $200,000 purchase by Guy Mulcaster for Raffles Racing from the Attunga Stud draft at the 2011 Inglis Easter Yearling Sale.

Paul Messara bought and trained 3YO Scissor Kick (Redoute’s Choice x Back Pass) produced a strong first up performance to win the Group 3 ATC Eskimo Prince Stakes over 1200m at Rosehill. The $200,000 purchase from the from the draft of Broadwater Thoroughbreds at the 2013 Inglis Easter Yearling Sale took his winnings to over $500,000.

Thurlow (Sebring x Princess Emmy), a $150,000 Inglis Easter buy by David Redvers from the draft of Widden Stud, won the Group 3 MRC Chairman’s Stakes at Sandown. Trained by Robert Smerdon for Qatar Bloodstock, Thurlow took her winnings to nearly $190,000 and her race record to two wins and a second in just three starts.

Widden Stud will offer the half-sister to Thurlow by Northern Meteor as Lot 114 at the 2015 Inglis Easter Yearling Sale. Despite Northern Meteor’s untimely demise, he continues to consistently produce outstanding performers on the track and his final crop of yearlings will be offered this year.

The half-brother to Sensible Lover by Hussonet will be offered at next month’s Inglis Premier Yearling Sale in Melbourne as Lot 10. The dam of Sensible Lover has now had three foals to race for three winners.

Also to be offered at the Inglis Premier Sale will be the half-sister to Saturday’s $250,000 RL Inglis Premier Race winner, Stoker. The filly by Ilovethiscity will be sold as Lot 581 from the draft of Woodside Park Stud and is the second foal from Stratum mare Troposphere.

574 yearlings were catalogued for the extended three day Inglis Classic Sale on 8, 9 & 10 February.

605 yearlings have been selected for the Inglis Australian Easter Yearling Sale on 7, 8 & 9 April.

For catalogues and information go to inglis.com.au