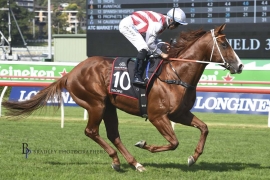 Racing and stud prospect Trope has topped the March (Late) Online Sale, selling for $245,000 to Paul Lofitis of The Lofty Thoroughbred Group.

The multiple Stakes-performed 4YO, by More Than Ready out of Stakes-winning mare Personify (Galileo), has been closely followed by Lofitis throughout his racing career, making it an easy decision for him to pursue the purchase.

“We’d like to race him on but the main reason we bought him is for breeding purposes as we have a few nice fillies that will suit his bloodlines,” Lofitis said.

“We have a property down at Cranbourne but initially we want to give him a few runs and see how we go first – obviously things are a bit tricky at the moment but I will send him down to Julius Sandhu at Cranbourne who I race around 10 other horses with.

“I know the horse pretty well – I’ve backed him a few times.

“You need to do your homework of course; the first thing we did was contact vets and those who have seen him in the flesh, but the videos and photos provided were a great guide and overall the system was great.”

It is also the second-highest this year following the January Online Sale which realised $2.01 million.

Trope was offered by his owner Alan Bell, who was thrilled with the result.

“I thought it was great, really professionally run and the horse was very well and widely promoted and he reached what I thought was a very fair price for him,’’ Bell said.

“We’ve had enquiries from Hong Kong, Singapore and most states of Australia – and it’s another validation of the Inglis Digital platform.

“I’ve actually been impressed with the prices that have been achieved with the twice-monthly online sales – I do follow it and it speaks to the convenience and accessibility of the platform for buyers and vendors, plus the cost efficiencies for selling.

“The repository process, with a full set of x-rays and video scope made the vet inspection process very streamlined, so along with the videos and photos there was a high degree of confidence to buyers far and wide in terms of the transparency.

“I feel that most, if not all of the critical information as a buyer is accessible online – you don’t have to leave your desk at the office or living room to obtain that information and have confidence around the horse you’re bidding on. Bell also touched on the advantages of the digital platform in an evolving world.

“Inglis have shown great foresight in setting up Inglis Digital a few years ago, it puts the industry in a position where we can still have a viable marketplace in times such as these,’’ Bell said.

“As someone who is active in the industry, I’m very grateful to Inglis for developing and investing in technology which will keep trading opportunities in place for us, especially when movement is restricted.’’

The second-top lot was Alasaayel (Medaglia d’Oro) offered by Ramsey Pastoral, who bought the mare for just $12,000 from the October (Late) Online Sale.

Now in foal to Merchant Navy, the half-sister to G3 Ottawa Stakes winner Aryaaf sold to Lakeview Resources for $75,000.