Vanbrugh Building For His Stud Career 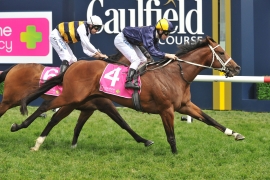 Encosta De Lago’s classy Group One winner Vanbrugh gave his future stud career a boost with his win in the G3 Coongy Cup at Caulfield on Saturday.

The entire is set to commence his stud career in 2017 in New Zealand at Windsor Park Stud.

Windsor Park secured standing rights when they bought into Vanbrugh Horseform following his win in the G1 Spring Championship Stakes last season as a three-year-old.

Vanbrugh will be seeking a second G1 win at the Melbourne carnival in the Emirates (Mackinnon) Stakes at Flemington on November 5.

The Windsor Park roster will take on a new look in 2017 as the stud has also acquired Rageese, the high priced son of the late Street Cry.

“We are looking to have both Vanbrugh and Rageese back at home next year so they can start their new careers for us at the same time,” said Windsor Park’s Rodney Schick.

“Having a son of Encosta De Lago and a son of Street Cry kicking off at the same time is exciting. We can’t wait for next year.”

A $100,000 Easter yearling purchase by international bloodstock agent Mick Flanagan for American owners John Moores and Charles Noell who race under the banner of Merriebelle Stables, Vanbrugh also counts the G3 Gloaming Stakes among his five wins from 17 starts.

He is the third foal and second winner for Soho Secret, a metropolitan winning half-sister by Lucky Owners to Group winners Sportsman, Prisoner of Oove, Hoystar and King Of Prussia.

Soho Secret has since produced a filly and a colt by So You Think and was also covered by Sebring.