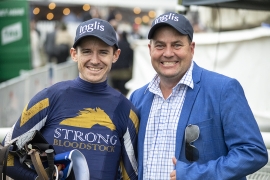 Vegas Raider (Invader) began his career in the best way possible with a come-from-behind debut victory in today’s $200,000 Inglis 2YO Challenge at Scone.

Trained by comeback trainer David Pfieffer, Vegas Raider was taken to the rear of the field from a wide barrier by jockey Jason Collett and looked to have too big a task ahead of him at the top of the straight.

But such is the untapped ability of the youngster, he was able to power home down the outside to beat River Danzka (Headwater) and Invest In Love (Capitalist).

Pfieffer teamed up with Blake Armstrong of Strong Bloodstock – with advice from Ollie Koolman - to secure Vegas Raider for $38,000 from last year’s HTBA May Yearling Sale, where he was offered by Fairview Park Stud.

The Danny Molloy-bred Vegas Raider was originally an Australian Weanling Sale graduate, where Mark Egge purchased him from Middlebrook Valley Lodge for just $8000.

“We saw him at the sale and Ollie, Dave and I all really liked the horse, we wanted to get an Invader at the time and when we saw this bloke, we all agreed he was the one for us,’’ Armstrong said.

“We’d set him for this race and he trialled really well last week but when the field came out on Wednesday and we were first emergency, we had a nervous wait, I was refreshing my phone every 10 minutes for 24 hours or so it seemed but when we saw the topweight come out and we had a run, it was great relief.

“He had a lot to do today, it’s not easy for a 2YO to draw wide on debut and go back and have to circle the field and win but he was able to do it so I think we’re going to have plenty of fun with him going forward.

“Thanks to Inglis, to be able to have a race for $200,000 to contest on debut, restricted to horses from specific sales, is awesome. The owners in this horse love a good time and they enjoyed the win and they’re enjoying being at Scone Cup Day and they’ll certainly enjoy tonight.’’

Pfieffer described the win as “fabulous’’.

“We like the horse, we thought he could run a bold race but it’s bloody tough to do what he did and I’m so proud of him,’’ the elated trainer said.

“It’s great to team up with Strong Bloodstock, they’re an up-and-coming syndicator who love their racing and have a great eye for a yearling so it’s a huge thrill to be able to win this race for them so early in their time.’’

Today’s win was the second consecutive year Pfieffer has trained the winner of the Inglis Challenge, following the success of Artero 12 months ago.

Pfieffer also received a pair of Swarovski Optik binoculars today for training a winner of an Inglis Race Series event.

Today’s result was another big one for the team at Fairview Park in an Inglis Race Series race, having also sold former Race Series events winners Prime Star (Inglis Millennium) and Mossfun (Inglis Nursery) ad well as The Art Of Flying, who placed in the Inglis Banner.

Meanwhile in today’s other feature – the Listed Scone Cup – the Kris Lees-trained Rustic Steel made it back-to-back big-race wins with a tough victory.

Bred by Blake Sandblom and Henry Field, Rustic Steel is a $500,000 Easter Yearling Sale buy for Kieran Moore’s Tasman Bloodstock, from the Newgate Farm draft and races in the famous Wanless silks.

Attention now moves to the Inglis Digital May (Late) Sale, for which entries are now open.

Entries close at midnight on Wednesday (May 18), with the sale running from May 20-25.