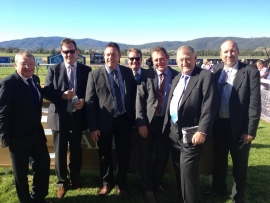 Local trainer Rod Northam won his third $100,000 Inglis 2YO Challenge in five years thanks to a strong performance by I Am Invincible juvenile Voodoo Lad today at the Scone Race Club.

Voodoo Lad (I Am Invincible x O'Fortuna) jumped straight on the speed for jockey James McDonald and travelled very smoothly in the run before dashing away at the top of the straight. Runner-up Rom Baro tried hard to close the gap but could only get within a length and a half of the winner on the finishing line.

"I have always thought he would make a good horse and this is the race we aimed him at. Winning this race three times on my home track is a real thrill,” said a jubilant Rod Northam.

The other recent Inglis 2YO Challenge winners trained by Rod Northam were Okane (2010) and Tinszelda (2012).

Winning rider James McDonald is confident that Voodoo Lad can continue to step up to the next test set by Northam.

“He only does what he has to but he had something left in the tank on the line. He is a nice horse. I think he has a big future,” said McDonald.

"It's a great thrill to win the race and having bred the winner makes it even better. I always liked him and that is why I bought back a share,” added Leckie.

Today’s victory takes Voodoo Lad’s earnings to $102,110 thanks to two wins and a second placing from three starts.

210 yearlings have been catalogued for the 2014 Inglis HTBA Scone Yearling Sale which commences at 10:30am this coming Sunday 18 May.

Voodoo Lad’s sire I Am Invincible is represented with 10 yearlings in Sunday’s auction, including four in Yarraman Park Stud’s draft.

All yearlings purchased at the Inglis HTBA Scone Yearling Sale are eligible to be entered in the $5 million Inglis Race Series which includes the $100,000 Inglis 2YO Challenge.

The 2014 Inglis HTBA Scone Yearling Sale catalogue can be viewed online at www.inglis.com.au and on the Inglis Sales iPad App

Nomination forms and additional information on the Inglis Race Series can be found at www.inglis.com.au/races