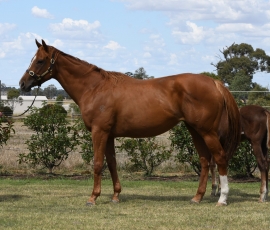 A Stakes-performed mare with a colt at foot “by the hottest sire in the country” and in foal to Street Boss, headlines a massive Inglis Digital catalogue of 262 lots in the February (Late) Online Sale.

Consigned by Sheamus Mills Bloodstock (as agent), Divine Power’s first foal is a colt by Written Tycoon, who has sired 11 individual Stakes winners so far this season – more than any other stallion – led by Ole Kirk.

The 7YO mare is also offered in foal to Darley sire Street Boss, who could be in for a big weekend with two runners in the G1 Blue Diamond Stakes as well as Hanseatic in the Oakleigh Plate.

By Power and from an Oasis Dream mare, Divine Power has a Danehill-free pedigree and was a 2YO winner and Group 3 placed on the track.

The February (Late) Sale is the biggest Inglis Digital catalogue so far this year, with 156 lots alone in the racehorse categories, located in QLD, SA, VIC, NSW and WA.

There are also 70 broodmares, 19 yearlings, 13 shares, three unbroken stock and one stallion –Spiritjim (Galileo), a G2 winner in France offered by Sun Stud (as agent).

• Attract – 3YO Sebring half sister to Stakes winner Pretty In Pink, offered as a broodmare

• Bold and Wild – 5YO son of Redoute’s Choice and Once Were Wild, he’s a 3x winner from just 10 starts, offered unreserved by Strawberry Hill Stud

• Encyclopedia – Unraced 2YO by Divine Prophet who won a Gold Coast trial on February 15, offered by Aquis Farm (as agent)

• Ladys Angel – 14YO Stakes-winning and G1-placed mare offered by Sun Stud (as agent) in foal to National Defense, she’s the dam of two winners

• Pyrmont – 3YO Warwick Farm winner who has placed at Randwick and Rosehill and has form around The Bopper, Wild Ruler, Anders and Malkovich

• Rose to Victory – Smart Missile half sister to Stakes winner Bring Me Speed, a maiden from 12 starts but ran 2nd at Canterbury on Jan 15

• Sabor – Lightly raced 3YO Lonhro colt out of G1-placed Redoute’s Choice mare Sensibility, he’s had three starts with a 2nd at Canberra his best effort to date

• Sweet Martini – full sister to dual G1 winner Zarita, offered in foal to So You Think

Buyers from the Inglis Digital platform continue to be rewarded by racetrack success. Last weekend at Flemington, the progeny of two broodmares sold on Inglis Digital in 2020 won at Stakes level.

On Thursday, 4YO Hello Sunshine – a $30,000 buy in December – won his maiden by a whopping 7L at Newcastle, while $600 July (Late) purchase Curran, won at Pakenham at his second start.