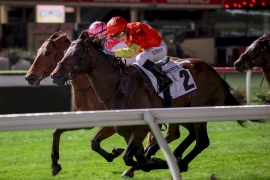 An Everest slot for Inglis Easter star Wild Ruler (Snitzel) could be locked in as early as Monday following his win in last night’s G1 Moir Stakes at Moonee Valley.

The Snowden Racing-trained 4YO Wild Ruler secured a deserved maiden G1 win in the sprint feature, backing up his strong first-up performance when second to Nature Strip three weeks ago.

Newgate teamed up with China Horse Club and Winstar to purchase Wild Ruler for $525,000 at the 2019 Inglis Easter Yearling Sale, where he was offered by his breeder Kia Ora Stud.

He continues an incredible run of success enjoyed by Henry Field’s Newgate Farm, China Horse Club and partners with colts purchased as yearlings from Inglis sales in the past few years, a tally that also includes Russian Revolution, Cosmic Force and Strasbourg, as well as G1 Golden Rose contenders In The Congo and Tiger Of Malay.

Should Wild Ruler earn a start in The Everest at Randwick on October 16, he would join fellow Inglis graduates Gytrash, Classique Legend, Nature Strip, Lost And Running and Masked Crusader as confirmed runners in the $15m event.

Wild Ruler has been an above average galloper from the outset, winning the $500,000 Listed Inglis Nursery on debut and has finished in the top three at 10 of his 13 outings.

The Nursery – this year to be run on December 11 – continues to be arguably the form 2YO race of the season year in year out, with other previous winners including the likes of Extreme Choice, Mossfun, She Will Reign etc.

“Take out his wet runs and his form is elite,’’ Field said.

“He was soft first-up off just the one trial and he still finished within two lengths of Nature Strip who’d had a picnic in front so there was always going to be a stack of improvement off that run and there’s still more to come.

“Peter and Paul Snowden have said from day one that this was a Group 1 horse and it’s great to have another stallion secured for the team, it’s really very exciting.’’

As for an Everest berth, Field said: “The plan was that if he won the Moir, he’d head toward the Everest. He’s already had good interest from slot holders, we’ll finalise that on Monday I’d say.

“That won’t be the end, either. He’ll be back in the autumn to try and win the TJ at Randwick and he’s proven down the straight as well so he could be a Newmarket horse in the autumn too.’’

While Wild Ruler won the feature last night, he wasn’t the only Inglis graduate to star at Moonee Valley.

Following his win in the G2 Stutt Stakes, the obvious question surrounding Inglis Ready2Race graduate Forgot You was just how good is he?

The 3YO was dynamic in winning the Stutt Stakes, looking in big trouble rounding the home turn before finding phenomenal acceleration late to claim a maiden Stakes victory.

In doing so, he firmed into $15 third favourite in the G1 Caulfield Guineas and $10 second favourite for the G1 Victoria Derby with TAB.

Forgot You is a $330,000 buy for his trainers Busuttin Racing from last year’s Inglis Ready2Race Sale, where he was offered by Ohukia Lodge.

The lightly raced 3YO colt, bred by Waikato Stud’s Garry Chittick, has now won his past two starts and has an exciting spring ahead.

This year's Inglis Ready2Race catalogue is available now for the sale, to be held at Riverside on Tuesday October 26.

Talented mare So You Assume (So You Think) scored a valuable first Stakes victory when winning the G2 Stocks Stakes at Moonee Valley.

In a dominant pillar-to-post performance, So You Assume secured a third straight win and fifth overall from just 12 starts, taking her prizemoney to over $400,000.

It’s a huge result for trainer Shane Nichols, who purchased her for just $40,000 at the Inglis Premier Yearling Sale, where she was offered by her breeders Lauriston Thoroughbreds.

So You Assume will now likely progress to G1 targets deeper into the spring.

And the Caulfield Cup dream remains alive for Secret Blaze (Sizzling) following his determined win in the G3 JRA Cup at Moonee Valley.

It was a second Stakes win and seventh overall for the 6YO, a $90,000 Inglis Premier Yearling Sale buy for his trainers Tony and Calvin McEvoy, from the Millford Thoroughbreds draft.

The win took his overall earnings past the $700,000 mark for connections, a wonderful achievement by Secret Blaze, who was bred by Andrew and Nielma Grant-Taylor.

McEvoy will decide in the next week which race to target next but said the Caulfield Cup dream was well and truly alive.