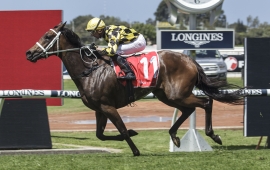 One of the best bred mares in the Southern Hemisphere headlines another strong catalogue for the Inglis Digital September (Late) Online Auction, which is now open for bidding.

Archanna (Snitzel x Azmiyna) is a city-winning three-quarter sister to five-time G1 winner The Autumn Sun and would be highly desirable to any serious broodmare band in the world.

She burst onto the scene with a 3.8L victory on debut in February last year, immediately proving herself an above-average race filly with one of the deepest pedigrees in the Stud Book.

Overall, the lightly-raced mare has won three of her 11 starts – all on Sydney metropolitan tracks.

Archanna herself was a $1.3m Easter Yearling Sale purchase for her trainer Chris Waller and agent Guy Mulcaster.

Her three-quarter brother The Autumn Sun was the colt of his generation, winning five G1s – the JJ Atkins at two, the Golden Rose/Caulfield Guineas double as a spring 3YO and the Randwick Guineas/Rosehill Guineas double as an autumn 3YO.

The Autumn Sun now stands as a young stallion at Arrowfield, and his first yearlings will be offered in 2022.

Archanna (pictured) will be offered as a racing and breeding prospect in the September (Late) Online Sale, one of many standouts in the 208-lot catalogue which includes 126 racehorses (57 race fillies), 42 broodmares (two IF, six FAF), five 2YOs, 14 yearlings and 22 shares.

Other highlight lots include:

*Apple Schnapps, a four-time winner from 15 starts including three of his past five starts in WA

*Heywood, an unraced Super One 3YO who won his most recent barrier trial last month at Cranbourne

*Hinson, an unraced Snitzel 3YO who has won two trials in Sydney

*Stakes placed entire Living The Dream, a close-up 3rd in the Listed Boulder Cup in Kalgoorlie seven days ago

*I Am Invincible mare Our Regal Spirit, with an Invader FAF

*Stakes placed filly Pambella, most recently a 0.1L 2nd at Belmont in WA a fortnight ago

*Revolutionary Girl, a winning half sister to Stakes winner Warpath

*South Pacific, a Flemington winner in June for Ciaron Maher and David Eustace

The Inglis Digital platform continues to prove itself a one-stop online shop for buyers, with graduates winning 1765 races in Australia this year already.

The platform also celebrated its second G1 winner last weekend when Callsign Mav was victorious in the Tarzino Trophy in Hastings, 11 months after a 36% share in him was sold through Inglis Digital.

The September (Late) Online Auction is now open for bidding at inglisdigital.com, with the Final Countdown starting from midday on Wednesday (September 29).