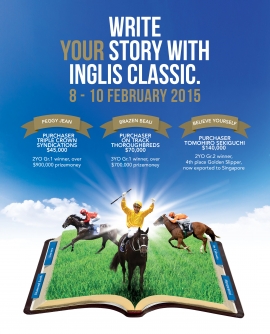 Nearly 40% of the 2015 Inglis Classic Yearling Sale Summer Book is made up of progeny by first and second season sires, a huge positive for buyers given Classic’s phenomenal record of unearthing Group 1 winners by young unproven stallions.

18 stallions since 2000 have had Group 1 winning progeny from their first or second crops graduate from the Inglis Classic Sale, including subsequent top sires Redoute’s Choice, More Than Ready, Dubawi, Street Cry, Danehill Dancer and I Am Invincible.

Classic provided buyers access to the aforementioned sires before their progeny rose to great heights on the racetrack, which was swiftly followed by service fee rises and consistent six figure yearlings that proven sires demand.

“Inglis Classic is not only Australia’s most accessible sale but one of the most successful with no less than seven individual Group 1 winners purchased from Classic in one year, including two international champions,” points out Mark Webster, Inglis’ Managing Director.

$70,000 yearling buy Brazen Beau is expected to venture to England later this year in an attempt cut a swathe through Royal Ascot just as fellow Inglis Classic graduate Choisir did in 2003 claiming the King’s Stand Stakes / Golden Jubilee sprint double.

“Classic has a phenomenal record with young sires and we are rapt to have 255 yearlings catalogued to offer in 2015 by a great collection of first and second season sires to continue the sale’s success,” said Jonathan D’Arcy, Inglis’ National Bloodstock Director.

Each of the first season sires are being highlighted across Inglis’ social media platforms in the lead up to the Classic Summer Book using the hashtag #FirstSeasonSireADay – follow for daily information.

Peggy Jean was snapped up by Triple Crown Syndications for $45,000 from the second crop of Myboycharlie at Inglis Classic before going onto Group 1 success at The Championships last year.