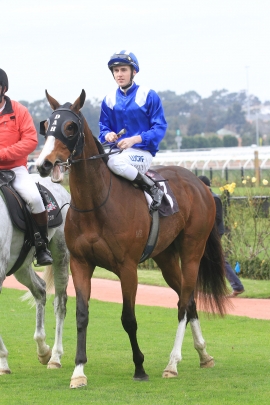 The Hayes dynasty has its newest Flemington winner.

Earlier this week Ben Hayes joined his father, Hall of Fame trainer David, and cousin Tom Dabernig in partnership and he hasn’t had to wait long for his first Melbourne winner.

Smart filly Zunbaqa made it four wins from five starts as she prevailed in the VRC Member John Gubbins Handicap (1400m), holding off Benny Goes Berzerk and the well-backed favourite Decorated Soldier with the help of a good ride from Dylan Dunn.

While Ben wasn’t at Flemington to celebrate the success, his dad was delighted to kick off the new arrangement as a winner.

“He’s over in Adelaide saddling up Kifaah, but he just rang in thrilled,” David Hayes said.

“It’s good to get a win for the new partnership first-up, especially at Flemington.”

Zunbaqa has continued her progression and Hayes will set her for the Group 2 Edward Manifold Stakes.

“She got everything wrong her first start, but she’s just gradually kept improving,” he said.

“She fell in her first time in Adelaide, she won dominantly last start and was pretty dominant today.

“I really feel she’ll be a really good Edward Manifold filly over a mile here.

“She did have the advantage of that really good winter fitness and base on her but I do think she can go into the spring.”

The stable made it a double later in the day with Shaf taking out the Jockey Celebration Day Handicap (1000m) for Mark Zahra.