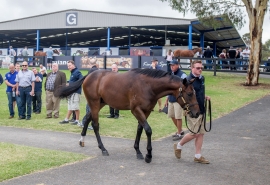 First season sire Equiano provided the top lot on an action packed second day of the 2014 Inglis Melbourne Premier Yearling Sale when a colt by the dual King’s Stand Stakes winner sold for $420,000.

Swettenham Stud, which stands the ‘King of Speed’, offered Lot 297 by Equiano from Group 1 placed mare Hidden Energy. The strapping colt was one of the most paraded yearlings at Oaklands last week and that led to exceptional interest in the sale ring. Numerous bidders were active on the colt which was finally secured for Tan Sri Vincent Tan / Dato Robin Tan of Malaysia with a knockout bid of $420,000 – the highest price ever paid for a yearling by a first season sire in Victoria.

“It is pleasing to see that so many Australian and international buyers have taking a liking to the physical make up of Equiano’s stock here in Melbourne. Many people remember his power defeating Takeover Target at Royal Ascot and it is that physicality that is so evident in the consistency of his yearlings,” points out Adam Sangster of Swettenham Stud.

Lot 297 is one of 38 yearlings to sell for $150,000 or more during the first two days of the 2014 Inglis Melbourne Premier Yearling Sale. That is a figure well up on the26 lots sold in the same bracket by the end of Day Two last year.

The ‘Blue Riband’ Session was again a huge hit with buyers seeking select yearlings bred and conformed to excel over middle and staying distances. 38 lots were sold at an average of $135,000 during the session.

“Buyers from Macau, New Zealand, South Africa, Malaysia, Singapore, China and all across Australia purchased one or more Blue Riband yearlings, which is a great endorsement for the concept and the quality product that vendors are bringing to Premier,” said Inglis’ Melbourne Bloodstock Director Peter Heagney.

Lot 225, a colt by New Approach from Entrust, was purchased by Derek Brugman’s Nordic Racing & Breeding of South Africa for $300,000. The colt was offered by Blue Gum Farm.

The Penang Turf Club secured Woodside Park Stud’s colt by Encosta de Lago from Special Episode that was offered as Lot 250 for $360,000.

Woodside were also the vendors of Lot 252, a colt by Fastnet Rock from True Seduction, which was purchased by Dean Hawthorne and Peter Morgan for $310,000.

In addition to Equiano another first season sire to star outside of the Blue Riband Session has been Blue Diamond winner Reward For Effort. Champion Victorian trainer Peter Moody went to $170,000 to purchase Lot 285 which hails from the family of Special, a mare that held the Flemington 1000m track record until Inglis Premier graduate Black Caviar broke it last year.

Yallambee Stud has maintained their position as the leading vendor by aggregate having sold 13 lots for $1,475,000.

Woodside Stud has sold all four yearlings they have offered at an average price of $217,500, giving them the highest average of all vendors (3 or more sold).

Complete vendor, buyer and sire statistics for the sale can be viewed at www.inglis.com.au

Horses passed in during Day One and Two of the sale are available for sale via the Inglis Make-An-Offer Service.

Day Three of the 2014 Inglis Melbourne Premier Yearling Sale starts at 10:30am tomorrow, Tuesday 4 March. The four day sale concludes on Wednesday. Inglis Sale Day Live and Online Bidding again available for buyers not able to make it to Oaklands.