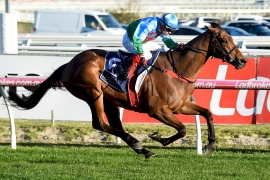 The 7YO Scales of Justice, a graduate of the Inglis Premier Sale, proved himself a genuine WFA star with an emphatic victory in the G1 Memsie Stakes at Caulfield.

Scales of Justice (Not A Single Doubt x Beymatilla) led in an Inglis graduates quinella in the Memsie, defeating Inglis Easter Sale graduate So Si Bon.

He becomes the 18th individual G1-winning Inglis graduate for 2019 and with two Australian G1 races having now been run in the 2019/20 season, Inglis graduates have won them both.

Bred by Gerard and Kathy Hammond, Scales of Justice (pictured) was consigned to the 2014 Premier Yearling Sale by Millford Thoroughbreds.

He was purchased by Boomer Bloodstock and Lindsey Smith for $180,000.

“Beymatilla was the first mare I ever bought and she turned out to be a wonderful producer but none turned out better than this bloke Scales of Justice,’’ Hammond said.

“Between his feet and his back there have been plenty of issues but I think today he really proved himself to the Victorian market that he’s a genuine top-liner, not just another Perth horse to come over and try their luck in the Eastern states.’’

Millford Thoroughbreds’ Richard Kerry remembered Scales of Justice as a yearling, describing him as “a lovely horse with a fair bit of size and scope about him."

“He was quite athletic for his size too and was a mature horse mentally early. Boomer loved him at the sales and so did we and the horse has progressed and done an awesome job to justify everyone’s early opinions of him.’’

Earlier in the day, a trio of exciting Inglis Easter colts dominated the Australian 3YO features with Exceedance (Exceed And Excel), Super Seth (Dundeel) and Quick Thinker (So You Think) asserting themselves as spring stars with comprehensive first-up victories.

Exceedance, bred by Nick and Amy Vass, and the Arrowfield Pastoral and Planette Thoroughbreds-bred Super Seth are now $8 TAB equal favourites for the G1 Caulfield Guineas after Exceedance won the G3 San Domenico Stakes at Rosehill and Super Seth proved too strong in the G3 McNeil Stakes at Caulfield.

Quick Thinker, bred by Bowcock Bloodstock, is into $13 for the Victoria Derby thanks to a big win in the G3 Ming Dynasty Quality at Rosehill.

All three are graduates of the 2018 Easter Sale – Exceedance was a $180,000 buy for part-owner Vinery Stud from Newgate Farm, Super Seth was purchased by Dean Hawthorne on behalf of Jonathan Munz for $280,000 from Arrowfield Stud while Quick Thinker was a $100,000 purchase from Coolmore Stud by De Burgh Equine for OTI Racing.

Exceedance is now also $4.50 Golden Rose favourite with the TAB.

It was career win No.4 for the Inglis Classic graduate – where John Meagher, who trains her in partnership with son Chris, purchased her for just $60,000 from Eureka Stud - at just her sixth career start.

And Wu Gok (Sebring) led in a Chris Waller ‘First 5’ when winning the G3 Premier’s Cup at Rosehill.

In Adelaide, G1-placed older sprinter Behemoth (All Too Hard) scored a deserved first Stakes win in the Listed Penny Edition Stakes at Morphettville.

The David Jolly-trained 4YO is a graduate of the Great Southern Sale, where Heritage Bloodstock bought him for $120,000 from Tyreel Stud.