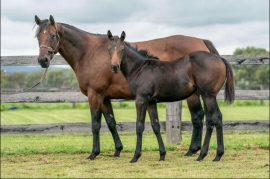 Out of Stakes-winning mare Tantra – a sister-in-blood to Liberty Rose and from the family of recent Widden Stakes winner Away Game – Layo Layo was offered by Richard McClenahan’s Mullaglass Stud in foal to Press Statement and with her maiden filly by Hellbent at foot.

A six-time winner herself, Layo Layo was secured by Brett Gall of Gall Bloodstock after a late bidding war between several parties.

“I really liked the mare and she will go to our stallion I Am Invincible, who I raced with my father Ray and we still own 50% with Arthur and Harry Mitchell of Yarraman Park Stud,” Gall said.

“We scan through every catalogue when they come out as we’re trading stock all the time and the 3-in-1 package was a big attraction with Layo Layo – plus I find the buying process very straightforward on the platform.

“Harry Mitchell went and had a look at her and she’ll now go to Yarraman with her Hellbent filly at foot, before being covered by Hellbent’s sire – I Am Invincible – next season.

We’ve actually got a quality Hellbent on the ground at the moment that’s a standout, a colt from Chickasaw and that also gave me the confidence to buy this mare.”

Mullaglass Stud have been a strong supporter of the Inglis Digital platform and along with Layo Layo, offered two other broodmares in the March (Early) Online Sale: Lady Rah Rah in foal to Invader and Light My Fire, in foal to Kermadec – with a 100% clearance rate.

“Having bred Hellbent (an Inglis Classic Yearling Sale graduate), it’s great to see his first progeny received so well with the sale of Layo Layo for $95,000.

“Selling through Inglis Digital is always so easy and it’s a great option for vendors in the marketplace.”

CLICK HERE to view the full catalogue and results, or to make an offer on any passed in lots.