Another strong day sees Great Southern end on a high 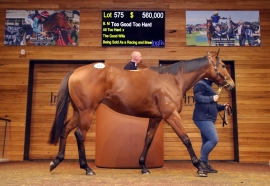 Group-placed mare Too Good Too Hard, offered by Mill Park Stud, today sold to Suman Hedge Bloodstock for $560,000, topping off a bullish two days of trade at Oaklands.

In the broodmare section, Too Good Too Hard (pictured) stole the show while Ra Ra Epic – a half sister to track phenomenon Incentivise – sold to Merricks Station and Group 1 Bloodstock for $200,000.

The strong individual sales saw the broodmares section end with an average of $49,169, a remarkable 93% jump from 2019.

Today’s leading weanling was lot 321, a So You Think x Collins colt of Makybe which sold to Mitchell Bloodstock for $290,000.

James Mitchell said a decision on whether to on-sell the colt as a yearling in 2022 or race him would be made in due course.

“He’s a beautiful colt and being by So You Think out of a full sister to Makybe Diva, his pedigree is impossible to fault as well,’’ Mitchell said.

“He’s got so much upside and while he was the one we wanted, we thought we might be able to get him a bit cheaper than that but this sale has again been so strong, like basically every other auction this year, that we had to stretch the budget to get him home.

“It’s been a great couple of days here at Oaklands, Inglis has as per usual done a fabulous job to even get this sale up and running given so many border restrictions at the moment, so credit must go to the Inglis team.’’

Makybe’s Joe Murray described the colt as “a marquee offering’’.

“We knew he was popular, he was always going to be, given he’s out of a full sister to Makybe Diva, and by So You Think, so most people who saw him once came back for a second look at least,’’ Murray said.

“The market was very strong for him straight away, we thought coming here $150,000 would be a good result, $200,000 would have been super but to get to $290,000 was just fantastic…we honestly couldn’t have been happier with the result.

“The competition was strong the whole way along.’’

The second-best selling weanling today went the way of Suman Hedge Bloodstock and Silverdale Farm, who paid $250,000 for a Capitalist x Sebrina colt offered by Widden as agent for Jock and Jennifer Mackay of Cangon Stud Farm.

“Overall as a buyer I’ve found it very hard here at Great Southern. It’s been an extremely strong sale, Inglis are to be commended for what they’ve done, they’ve presented a really good catalogue in what are some really challenging times.

“It’s a buoyant market, there’s a lot of competition and if you come away with one or two of your targets, you’re rapt. We’ve only got one weanling and have missed out on quite a few.’’

It was a telling result for Widden, who were presenting their first Great Southern draft under the Widden Victoria banner since purchasing the Sun Stud property earlier this year.

“Being the first sale as the new brand in Victoria we wanted to make sure we sold well and to have a horse make $250,000 at Great Southern is just awesome,’’ Widden Victoria’s Phil Marshall said.

“This colt was a horse that really stood out in what is a really strong sale.

“He was popular from day one, he had a heap of X-Ray hits, heaps of double and triple inspections so we knew fairly early on he was going to be in the top five per cent of the sale. All the big guys here were on him.’’

Of the top-selling mare Too Good Too Hard, Chris Watson’s Mill Park Stud said: “We knew she was a lovely mare coming here and had great credentials to sell well but that was well beyond expectations.

“It’s an absolute thrill to get a result like this. Inglis have done an enormous job and have bought some great buyers here to this sale and we’re extremely pleased and thrilled.’’

Inglis’ General Manager of Bloodstock Sales and Marketing Sebastian Hutch was delighted with the results across the board over the two days.

“We’ve traded almost $15m, have seen buyers participate both domestically and internationally and plenty of buyers and vendors are leaving with a smile on their face so it’s very satisfying,’’ Hutch said.

“I do need to thank and congratulate the vendors especially, they were understanding of our decision to delay this sale by three weeks due to Covid and many have been rewarded for their patience.

“This sale has a fabulous knack of producing great pinhook results and quality G1 horses and I have no doubt there will be top-quality performers out of the talent we have sold the past 48 hours.’’

If you wish to make an offer on a passed in lot from the Great Southern Sale, please contact Inglis’ Will Stott on 0408 126 952 or CLICK HERE.

Buyers’ attention now turns to the Inglis Digital July (Early) Online Sale, which will include arguably the rarest online offering the world has ever seen in G1 winner Funstar.

Entries for the digital sale remain open until midnight this coming Wednesday, July 7.

The sale will run from Friday July 9 until Wednesday July 14.