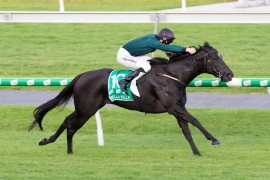 David Jolly initially spotted the mare in the catalogue of the 2019 April Online Auction - where she was offered by Glenn Haven Farm/Go Bloodstock Australia - and with the help of South Australian trainer Will Clarken, Clarken’s racing manager Lachie Weekley and John Kelton, formed a syndicate to purchase her.

“It’s absolutely fantastic, she gives her all every start and to win a G1 is amazing,’’ Kelton said.

“David [Jolly] found her and liked her and she was quite a well-bred horse too so we thought if we could improve her and get some more wins into her, she’d have good residual value too.’’

“In the past couple of years it’s really grown and the sale this week was huge and was very successful again.

“We can sit in the luxury of our own houses and do the work from there, it’s a very easy platform to use.

“There’s a lot more good quality stock there now every month so we’re more than happy to keep buying online from Inglis, we’ll be coming back for sure.’’

“G1s are so hard to get and all the teamwork that goes into it, she’s a stable star and a favourite of all of us.

“These guys in the ownership and who bought her have been with me from the start when I had five horses in work and now I’ve got 55, plus she ran in my father’s colours so it’s very special.’’

Earlier in the program talented filly Xilong (Deep Field) led from pillar to post to score a gutsy win in the G2 Euclase Stakes.

It was a fifth career win from just nine starts for the 3YO, whose half sister by Capitalist realised $300,000 when sold through the Newgate draft to Noorilim Park Thoroughbreds/X-Factor Pedigrees at the recent Inglis Easter Yearling Sale.

Xilong, who is one of 32 Australian Stakes-winning 3YO Inglis graduates this season, will now likely be given the chance to add a G1 to her imposing resume later in the Adelaide carnival in coming weeks.

Bred by SF Bloodstock and Blake Sandblom, Xilong is a $360,000 Easter Yearling Sale buy for her trainers Tony and Calvin McEvoy, from the Newgate Farm draft.

There are currently seven Inglis 3YO graduates to have claimed a G1 win in Australia so far this season, with others in that group – Exceedance and Shadow Hero – also having come through the Newgate Farm draft.

Toffee Tongue’s full sister Candyland is lot 32 at the Chairman’s, being offered in foal to Pierro by Holbrook Thoroughbreds on behalf of owners Bob and Sandra Peters, who also offer high-class multiple Stakes-winning filly Celebrity Dream in foal to Justify at the sale.

The Chairman’s Sale will take the format of a virtual auction with online and telephone bidding, just as the recent Easter Yearling Sale did.

It begins at 3pm this coming Friday, May 8, at inglis.com.au.