Booker to be offered unreserved at Chairman’s Sale 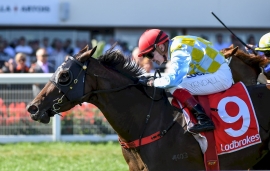 G1-winning sprinter Booker is the latest addition to an already star-studded line-up of fillies and mares in the 2020 Inglis Chairman’s Sale catalogue.

Described by her part-owner as the nicest type he’s ever owned – Booker will be offered for unreserved sale to dissolve a racing partnership – following an Autumn campaign with trainer Gerald Ryan.

By Written Tycoon and the first foal for Flying Spur mare Noondie – who sold for $600,000 to Mitchell Bloodstock at last year’s Chairman’s Sale – Booker boasts an enviable race record with close to $900,000 in earnings.

“I’ve always bought and raced fillies and I think of the 13 G1 winners Midge and I have had, she’s probably the nicest type we’ve had, Mannerism and the others were good sorts but Booker is just outstanding,” Barrie Griffiths said.

Booker was purchased by Barrie Griffiths at the 2016 Inglis Premier Sale from the draft of Mill Park Stud.

“I’m good friends with her co-breeder Bill Rigg and as soon as I saw her I wasn’t going to miss her, she was athletic but just so powerful – people will only have to look at her now and see how well she’s constructed.

“I went way beyond my normal price bracket to secure her for $230,000 because I thought so much of her in terms of her physique and it’s been both satisfying and a thrill for Booker to fulfill her G1 looks on the track.”

A winner over 1100m on debut at Flemington as a 2YO for Mat Ellerton and Simon Zahra, where she defeated subsequent G2 winner and G1 performer I’ll Have A Bit, Booker then ran second in the G3 National Stakes (1200m) at her only other juvenile start.

Her 3YO season saw her defeat Shoals and Catchy in the G2 Thousand Guineas Prelude (1400m), as well as a narrow second to champion sprinter Merchant Navy in the G3 McNeil Stakes (1200m) and fourth to Russian Revolution in a blanket finish to the 2018 G1 Oakleigh Plate (1100m).

Her career best came as a 4YO when defeating 17 rivals – including Nature Strip, Viddora and Spright – to take out the 2019 G1 Oakleigh Plate at Caulfield.

Booker was transferred to the Rosehill stables of Gerald Ryan earlier this year to concentrate on a Sydney Autumn Carnival campaign.

“She won a trial at Rosehill in great fashion but we will see what the weather does before deciding on where we target her – it’s likely to be the G1 TJ Smith at Randwick (April 4) or the G3 Star Kingdom Stakes a week earlier at Rosehill.”

Griffiths said Booker’s move to Sydney was in order to give breeders and agents a chance to see her before she’s offered at Riverside Stables on the evening of May 8.

“I will be sad to see her go – if I was a breeder I would never sell her – but we race fillies and the other owners aren’t breeders either so now that she’s rising six, it’s an ideal time to offer her unreserved to the marketplace.

“She has the right pedigree and G1 result to be a success at stud – plus her 3YO full brother Banquo is already a stakes winner and looks to have an exciting future with Danny O’Brien.”

Booker joins other headliners like In Her Time and Unforgotten for the sale, which will also include mares in-foal to the likes of I Am Invincible, Not A Single Doubt, Zoustar, Justify, The Autumn Sun, Trapeze Artist, Kingman and Lope de Vega among others.

Entries are closing soon for both the 2020 Chairman’s Sale and the Australian Broodmare and Weanling Sale.

Places in the Chairman’s Sale are limited, so interested parties are encouraged to download an entry from HERE or contact a member of the Inglis Bloodstock Team as soon as possible.