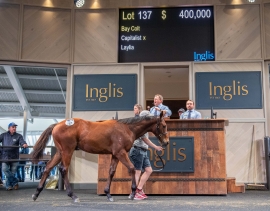 A $65,000 broodmare purchase from last year has today produced the top-priced lot at the record-breaking Australian Weanling Sale when a Capitalist x Laylia weanling realised $400,000 at Riverside.

Victorian-based breeder David Digney purchased the mare Laylia at last year’s Covid-impacted Australian Broodmare Sale – which was forced online due to travel restrictions resulting from the national lockdown at the time – carrying the Capitalist foal.

“It’s such a great result. We purchased the mare online last year, sight unseen as a 17YO but when she arrived here to us at Lemrac Lodge, which Megan Kirsopp-Cole manages and does such a fabulous job, you’d swear the mare was 10, she was sprightly and such a beautiful type that Newgate had looked after so well.

“[Inglis bloodstock consultant] Will Stott was instrumental in the purchase, he’s been guiding me so this result, it’s just fantastic.

“We knew we had a good product and Capitalist is very hot at the moment, and then when we found out the horse had 23 X-Ray hits, I knew plenty of people were interested in him. We put a $200,000 reserve on him because we just wanted to get him on the market and let the market sort the rest out so to get double the reserve, we were always hopeful of a result like this but until it happens, I guess you never really know.’’

The colt (lot 137, pictured) - offered in the Middlebrook Valley Lodge draft - was purchased by Ray and Brett Gall, in conjunction with Peter Morgan.

“I got asked what I thought and whether we should sell him as a weanling and I thought we should do it. I think that price justifies the decision.’’

The sale’s clearance rate ended at an ever increasing 86%.

The sale’s second-top lot – and leading filly – was lot 177, a Justify x Now Now filly from Fairhill Farm, which Silverdale Farm and Suman Hedge teamed up to buy for $300,000.

She was one of four purchases for Hedge and Silverdale, with a gross spend of $644,000, behind only Binalong Bloodstock as the leading purchaser.

“This sale in particular has been very strong and follows on from the strong results at the yearling sales, and I think it’s also indicative of the fact there is a lot of competition on these foals. There are some end users here as well, so it has been very strong,’’ Hedge said.

“We've missed on quite a few - you can see from the prices, that it has been very strong.

“You try to estimate what the horses might make and through the day, you see how strong the sale was, you probably had to adjust a bit for that.

“You still want to stay within your parameters. We look at the sale averages and medians as a bit of a guide as to where we are and we see this as an above average horse and we are trying to fit in there within our parameters.’’

The sale added to a memorable day for Mike and Debbie O’Donnell of Fairhill Farm, who ended as clear leading vendor, remarkably selling all 29 of their offerings to gross $2,209,000.

“This is fantastic, it’s been so busy all week, the foot traffic has been immense and parade numbers were through the roof,’’ O’Donnell said.

“It’s a great time to be a vendor, we love breeding horses and selling them but you still need good results to fund that love and we sell all our weanlings through Inglis and they should again be commended for getting all the buyers here not only for inspection days but today’s sale day, it’s been a tremendous sale.’’

“Again, we are reticent to do too much comparing to last year and are using 2019 as a fairer guide, and for the gross to be up more than 30% and average up more than 20% - while still clearing in the high 80s – is quite spectacular,’’ Webster said.

“To see Capitalist and Justify at the top of the stallion list for the sale and the likes of Hellbent and Harry Angel and Written By etc, all younger sires, performing so well in the ring, this industry is in such healthy shape not only now but moving forward as well.

“The weanlings continued a strong week of action at Riverside and now we move onto the Chairman’s Sale which, as everybody knows, is the highlight of the week in terms of world-class quality on offer.’’

The Chairman’s Sale is scheduled to begin at 5.30pm tomorrow at Riverside.

Due to the latest Covid restrictions enforced by the NSW State Government today, the auction will be restricted to registered buyers, registered sellers and invitees only.

For those wanting to watch the Chairman’s Sale from afar, tune into Inglis’ Sale Day Live Broadcast – hosted by Caroline Searcy and Lizzie Jelfs – from 5pm on the Inglis website (inglis.com.au) or the Inglis Facebook page.