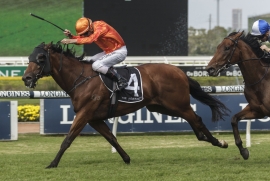 He may be best known for his Real Estate background but John McGrath today celebrated his first G1 winner as an owner/breeder in 25 years of trying when Dreamforce won the George Ryder Stakes at Rosehill.

McGrath, proprietor of John McGrath Real Estate, first purchased a share in a racehorse in the late 1980s.

Through ownership and breeding – a side of the industry he first started investing in when buying Dreamforce’s dam Eskimo Queen almost 15 years ago – he has yearned for the day he could say he bred and owned a G1 winner.

And while that day has finally arrived, it’s a story that didn’t have the greatest of starts with Dreamforce.

“I remember heading into the 2014 Easter Sale with this fellow and Mick Malone, who was offering the horse on our behalf through Kitchwin Hills, said he didn’t think he’d bred a nicer type on the farm in all his time,’’ McGrath recalled.

“But as we got to the sale…everyone said ‘it can’t walk’.

“I was talking to Gerald Ryan at the time and he told me not to worry, that he’d had plenty of good horses in the past that weren’t good walkers so I didn’t worry, and now he’s a G1 winner. What a thrill.’’

“This horse was the most magnificent Fastnet Rock you’ve ever seen but he had no action. He still doesn’t, walking in the mounting yard before that race today I could still see it,’’ Malone said.

“If anyone ever tries to tell you that a horse who doesn’t walk like a superstar means it can’t be a superstar, they are so wrong it’s not funny and this horse is the prime example of that. He’s won over $2m now. Wow.’’

Dreamforce becomes the 44th G1-winning Inglis graduate since 2018 and 16th from the Easter Yearling Sale in that same time.

McGrath co-bred and races Dreamforce with long-time friend Tony Crisafi. The pair watched the race on McGrath’s couch, given the on-course restrictions due to the Coronavirus.

“We screamed our lungs out, it was fantastic,’’ McGrath said.

“It’s a great feeling. This journey has had so many people on it over the years and to finally get that Group 1, I mean I’ve sold plenty of houses in my time but this feeling, it’s right up there with the best of my life.’’