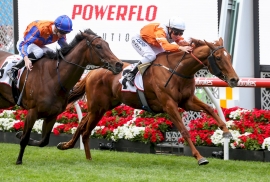 A 3-in-1 package of unprecedented quality – Group-winning mare Shoko (Sebring) in foal to Champion Sire I Am Invincible with an I Am Invincible colt foal at foot – will be offered next week in a bespoke Inglis Digital Online Auction.

Described as a “magnificent mare’’ whose I Am Invincible colt will be “a standout in any yearling catalogue’’, Shoko presents a rare public offering that all global breeders are urged to take notice of.

The package will be offered by Ridgmont Farm and Boutique Thoroughbreds, who along with Clarke Bloodstock purchased Shoko – in foal to I Am Invincible – for $1m at this year’s Inglis Chairman’s Sale at Riverside.

That resulting foal is part of this package, while the mare has been sent back to I Am Invincible to produce a full sibling.

I Am Invincible progeny have sold for up to $2,550,000, with 35 of his yearlings having realised $1,000,000 or more since 2017, while his latest headline colt Home Affairs finished his spring campaign as the highest rated 3YO in the land with a Timeform rating of 125.

Ridgmont Farm’s Andrew Dunemann described the Shoko offering as “an amazing opportunity that is very rare’’.

“I don’t think there’s been a mare of this quality, in foal to the Champion Sire and with a stunning colt foal at foot by the same Champion Sire, ever been offered publicly before, at least not in this part of the world,’’ Dunemann said.

“It’s a unique opportunity for breeders worldwide to get their hands on this fabulous package, it’s just such a rare commodity.

“Shoko is a beautiful mare, a striking physical and everyone who saw her at the Chairman’s Sale fell in love with her and we thought we were very lucky to get her for $1m.

“Her Vinnie colt who she was carrying at Chairman’s, we’ve had a number of people here to the farm to look at him already and they’ve all taken to him, he’s a great first foal with good scope, he’s very correct, got a nice head on him, just a really nice foal overall and he’s no doubt going to be a standout in any yearling sale his new owners may want to target him at.

“Shoko’s pedigree is one that will continue to upgrade, there are mares in the family in foal to some of the best stallions in the country, it’s a young family and obviously Mimi Lebrock is leading the way early not only on the track but off it also, with her daughter Diddles selling for $1m earlier this year.

“Our business plan is to offer something like this each year to the market and while it will be tough to part with Shoko and her colt, it’s part of who we are and how we plan to operate long term.’’

Inglis Digital’s Business Manager Nick Melmeth added: “People saw at the Chairman’s Sale earlier this year what a beautiful mare Shoko is and now that we know her I Am Invincible colt foal is as good as he is, this opportunity is one not to be missed.

“It’s a sexy pedigree and considering I Am Invincible colts averaged over $586,000 at Easter in 2021, before Home Affairs won the Coolmore, it doesn’t take much imagination to see how lucrative an investment opportunity this is for a discerning investor.

“Shoko and her colt are available for inspection at Ridgmont over the next eight days by appointment and if you can’t get there, all the necessary information will be available online at inglisdigital.com.’’

The bespoke Shoko Sale will go live from midday on Friday November 26th and be open for bidding at 10am this coming Tuesday, November 30 with the final countdown of bidding beginning at 4pm Wednesday December 1.

For more information, please contact Andrew Dunemann at Ridgmont Farm on 0409 275 729 or a member of the Inglis Bloodstock Team.

Prior to the ‘Shoko Sale’, the Inglis Digital November (Late) Online Auction is open for bidding and closes from midday tomorrow.

To view the 172-strong catalogue or to participate in the sale, CLICK HERE.