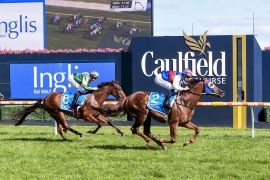 Ridden to perfection by champion jockey Hugh Bowman, Excess Funds made it two wins from three starts this preparation with a dominant victory in the feature sprint.

Kavanagh - who received a pair of Swarovski-Optik binoculars for training the winner of an Inglis Race Series event – purchased Excess Funds (pictured) for $85,000 at the 2018 Classic Yearling Sale, where he was offered by Moobi Farm.

“It’s not often a plan comes off but I targeted this race a long way out and it worked out perfectly today,’’ Kavanagh said.

“A big thanks to the team back home, it’s a huge boost to the stable.

“We’ve got a lot of friends and family and good clients involved so it’s great for everybody.

“I wanted to have him ready for this race and now we’ll probably head to Adelaide for the carnival, there’s some nice 3YO races there.’’

It was a fifth career win for Funstar at just her seventh start – she has also run two seconds – and took her prizemoney tally to almost $750,000.

It’s another spectacular result for the ultra-consistent Funstar, who cost Anton Koolman Bloodstock just $80,000 at the Easter Yearling Sale, where she was offered by Bowness Stud.

She will now likely target the G1 Vinery Stud Stakes (2000m) at Rosehill in a fortnight, for which she is a $2 TAB favourite.

“She’s by Adelaide, a middle-distance horse, so that rise in trip doesn’t worry me,’’ trainer Chris Waller said.

And New Zealand warhorse Enzo’s Lad bounced back to the winners’ stall with a typically courageous victory in the Listed Lightning Handicap at Trentham.

It was an eighth career win – and fourth Stakes success – for the Premier Yearling Sale offering of Eliza Park Stud.

There’s only a little over three weeks to go until the crème de la creme of the southern hemisphere yearling sales season - the Australian Easter Yearling Sale – is held at Riverside Stables on April 7 and 8.