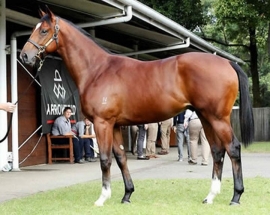 A $200,000 Inglis Easter purchase from the Newgate Farm draft for David Ellis, the well-related two year-old Stratum colt Summer Monsoon delivered the right result when he proved too slick for his rivals at Te Rapa.

The precocious youngster was into stride quickly from an inside gate and he was never headed on route to his maiden success in the juvenile sprint over 1000 metres.

"He's a really nice horse and he's showed us plenty of speed," said Stephen Autridge, who trains the talented colt with Jamie Richards.

"I think that was a pretty handy field so it will be interesting to follow the form out of it."

Bred by Newgate Farm and Blake Sandblom, Summer Monsoon is the first winner for Princess Narine, who was bought by Newgate Farm for $600,000 at the Magic Millions Teeley Assets Dispersal in 2014.

Princess Narine is a winning half-sister by Red Ransom (USA) to stakes-winners Precious Lorraine and Lucky Raquie and his grand-dam Monsoon Wedding is a sibling to Group II winners Redoute's Choice, Manhattan Rain and Platinum Scissors.

"He's got the pedigree and the ability, but we haven't got any immediate plans for him," Autridge said.

"We'll get him home and decide the right path for him to take. Longer term, the race for the colts and geldings at Matamata might be a good one for him."

He was referring to the Group II Reid & Harrison Slipper in February, a race the stable won last year with subsequent Group I winner Heroic Valour.

Summer Monsoon finished runner-up on debut last month and Autridge said the youngster had learned a lot from the outing.

"He ran really well at Ruakaka where he did things wrong. With that experience he's done everything right today and jumping well from gate two and finding the rail won the race for him," Autridge added.