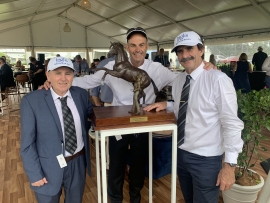 Among the ownership group of Inglis Millennium winner Prime Star are Robert Walton and Colin Lamonde.

Lamonde spent part of last year in hospital fighting prostate cancer. He declined radiation and had his prostate removed in May.

Walton is still waiting to see if he’s been cleared of Oesophageal cancer. He was released from hospital just last week.

Yet today at Warwick Farm, the pair felt like they were kings of the world when their Starspangledbanner 2YO – the first horse they have ever owned a share in – won the $2m Listed Inglis Millennium at Warwick Farm.

“It’s fair to say it’s been a pretty rough 12 months or so but I got a call from a mate of mine who works in the racing media six months ago and he said he knew of 10% of a colt that was available and that we should have a go,’’ Lamonde said as he reflected on today’s monumental result.

“I’d been crook so I thought ‘you know what? Why not, let’s have some fun’.

“So I took 10% and got Robert, Paul (Byrnes) and his son Zac involved, all who had never had a share in a horse either, and the horse was Prime Star.’’

Trained by Michael and Richard Freedman and ridden by in-form English jockey Tom Marquand, Prime Star proved too strong in a thrilling battle with runner up Bella Nipotina from the David and Ben Hayes and Tom Dabernig stable in today’s Millennium.

Larimer Street for Trent Busuttin and Natalie Young was third.

“The Freedmans have taken us on the journey with them and lo and behold we’ve just won a $2m race. You wouldn’t read about it,’’ Walton said.

“We’re just Joe Blow owners, we’re in it for the fun, not the money, but this sure can cheer you up.’’

For Lamonde, seven months ago it was less about being cheered up and more about survival.

“It was touch and go there for a while,’’ he said of his health.

“I knocked back radiation and instead had the prostate removed. I had my latest check up in December and it was clear so we’ll just keep checking and hope it keeps coming back clear.’’

The first-timers are among a large group of boisterous owners who shared in Prime Star’s win today.

Breeder Chris Lawlor parted with the yearling at the sale but had a feeling he was going to develop into a talented racehorse so kept a share in him as a result.

“He was always a lovely horse. I’ve still got the mare Barinka, she’s got a foal at foot by Deep Field and is in foal to Dundeel.

“This bloke was a really nice type of horse as a foal and yearling. Today, when he got around the corner and he was on the outside I thought ‘he’s in a serious winning position here’ and the rest is history.’’

Barinka also has a Kermadec yearling filly – which Lawlor sold as a weanling at the Inglis Australian Weanling Sale – which will be offered at the Inglis Premier Yearling Sale next month by Maluka Thoroughbreds as lot 43 on Day 1 of the sale, Sunday March 1.

“Classic is our main sale so to produce the winner of the Millennium in just its second year is a real feather in our cap,’’ Duckworth said.

“Like everyone you work hard, it’s just great, great for the team, great for the farm and I’m super excited for the breeders Chris and Lynne Lawlor who are fantastic clients of ours.’’

They will offer a stunning Pierro x Eye For Fun colt at the Australian Easter Yearling Sale at Riverside in April, a half brother to 2014 Golden Slipper winner Mossfun which they co-bred and sold at Inglis Easter.