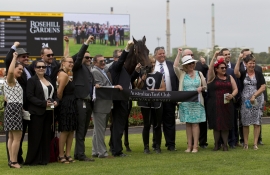 Racing NSW and the Australian Turf Club today revealed the changes, which will take prizemoney in NSW to more than $204 million annually from October 1.

Among the increases were:

Also announced was the establishment of a Horse Welfare Fund that will ensure all NSW Thoroughbreds will be appropriately cared for outside of their racing careers, both ex-racehorses and those who never made it to the race track.

The announcements comes less than a week after ASIC unveiled changes to horse racing syndication laws, which will see an increase in the number of owners allowed per syndicate, and a raising of the investment limit for a syndication at horse sales.

“I’d personally like to acknowledge the outstanding efforts of the staff at Racing NSW and the ATC, especially their respective CEOs and board members, who have worked tirelessly for a long time to ensure these prizemoney increases have become a reality,’’ he said.

“Racing NSW Chairman John Messara and CEO Peter V’Landys in particular have been dedicated to a program of pro-active engagement and policy reform with the NSW Government which has paid off enormously for racing and breeding industry participants in NSW.

“These announcements - both today’s prizemoney increase and last week’s syndication laws – combined, further highlight the fact there has never been a better time to be involved in racehorse ownership and breeding in NSW.

“The next opportunity industry participants will get to actively pursue these new benefits will be at the Inglis Ready2Race Sale on October 4, where we will have assembled the strongest ever catalogue of two-year-old’s in Australia, so we are very much looking forward to that.’’

For the full press release on the Racing NSW prizemoney announcement.